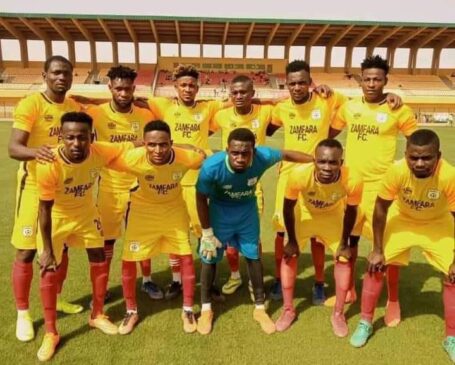 Zamfara United scored its first goal through Charles Igwe in the first half of the game, while Chiobuze Ebuka with Jersey No 16 scored the second goal in the 31st minute of the game

The first half ended with 2 – 0 in favor of Zamfara United.

Zamfara United football team has won six home matches, drew one, lost six away and drew another away, with twenty points in the fourteen matches so far played this season.

Chief Coach of Sokoto United FC, Mohammed Mohammed explained that the game against Zamfara United will not affect his team on the table of the NNL as they have other home and away matches.

He said that he was very confident that his team would make it, assuring that his boys will do wonders and will win most of the games

He called on the club’s supporters to always abide by the rules of the game, saying that insults and intimidation among other things should not part of a football game.

Addressing newsmen, the Technical adviser of Zamfara United Football Club, Alhassan Mohammed described the quality of the match as okay.

According to him, the victory over Sokoto United is worth celebrating as they are a good football team.

“The victory is not just for the team, but for the entire Zamfara people

“The three-point secured by my players will help the team move up on the NPFL table by the end of this weekend’s league matches,” he said.

However, the Zamfara United FC’s Technical Adviser, Alhassan Mohammed was not satisfied with the way Nigeria Referees were officiating games and called for correction.