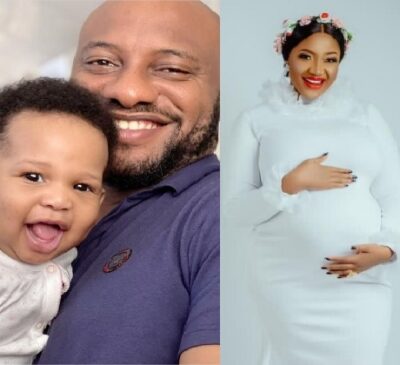 Yul Edochie on Wednesday presented to the public his second wife, Judy and also showed off his son by her. Yul Edochie announced the infant with his mother as the latest addition to his family.

According to Yul, it was time the world met “Star Dike Munachimso Yul-Edochie” born by his second wife, Judy Austin Muoghalu.

He wrote: “It’s time for the world to meet my son. His name is STAR DIKE MUNACHIMSO YUL-EDOCHIE.

The 40-year-old movie producer on Wednesday shared photos of an infant and a pregnant woman.

Meanwhile, Mrs. May Aligwe Yul- Edochie, the first wife of popular actor Yul Edochie, has reacted to his post unveiling his second wife and son.

The wife of Nollywood actor, Yul, reacted to trending pictures of her husband and another woman, Judy Austin Muoghalu, whom the actor described as his second wife as well as their child.

“Born by my second wife @judyaustin1 And I love him so much, just as much as I love my other children.”

May Yul-Edochie, who married the actor 17 years ago and has 4 kids with him, reacted to Yul’s post expressing her displeasure over the post.

She wrote, “May God judge you both.”

Her comments have since generated conversations on social media, with many attacking Judy.

Edochie’s second wife’s revelation comes as a shock to many of his fans who had no idea of the development.

Yul Edochie, born Yul Chibuike Daniel Edochie on 7 January 1982,  is a Nigerian actor, named after popular Russian actor Yul Brynner. He is the son of a Nigerian great actor Pete Edochie. He got married at the age of 22 with four children and the last of 6 children from Anambra State.