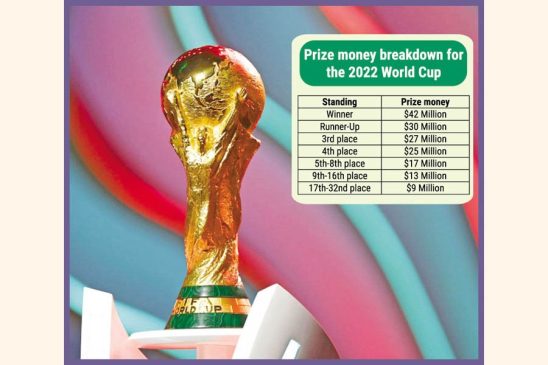 FIFA distributes the prize money based on the finances they gain from hosting the tournament. The prize money has increased from four years ago when a pot of $400 million was dished out between the 32 teams.

Aside from the pride each nation generates for going on a run at the World Cup, each nation also earns World Cup prize money based on their performance.

FIFA will dish out $440 million in prize money for the World Cup as cash is given out depending on which stage of the tournament they reached, plus each team received $1.5 million just for qualifying for the World Cup.

Yes, the game is all about glory and winning the ultimate prize and being crowned Champions of the World, but players are also playing to earn some nice bonuses which also help to fund their national teams and associations.

Below is a breakdown of the World Cup prize money table in full, with details on how much each team made from their run at the 2022 World Cup in Qatar.

It is down to the individual nations as to how much they pay their players from the prize money they receive. Some countries may distribute the money based on appearances, or others may split it evenly.

Teams who reached the Round of 16 earned $13 million each

Teams who reached the Quarterfinals earned $17 million each