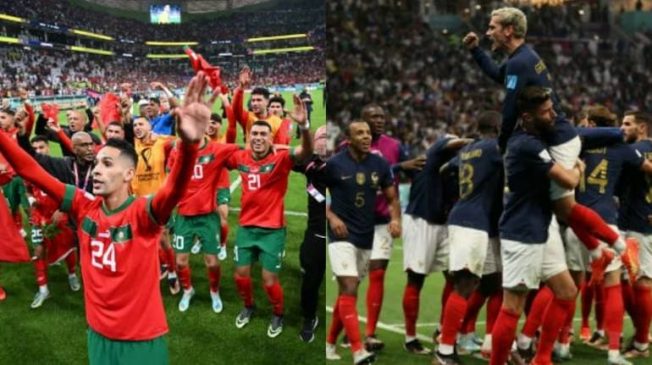 Perhaps regarded by some as an underdog team, the Atlas Lions of Morocco has proven to be a formidable team and is on its way to the Semi-Finals of the FIFA World Cup 2022TM in Qatar becoming the first African country to do so after stunning Portugal on a 1-0 win in the quarter-finals.

In the semi-final game on Wednesday night, Morocco will go head to head with current holders France in a decisive match as the Hoalid Regragui team aim for the finals. The much-anticipated match will stream live on Showmax Pro in 4k and HD, courtesy of SuperSport.

The journey of the Lions began with a not-too-impressive goalless draw against Croatia in the group stage. They seemed to lack the attacking force to keep up with other teams like Belgium in Group F, but the Moroccans have become a contender for the 22nd edition of the World Cup title.

After knocking out Spain and Belgium, two world-class teams, Morocco slugged it out with Portugal in what was an epic encounter that would live in the minds of African football fans for many years.

The Al Thumama Stadium erupted just before half-time when striker Youssef En-Nesyri leaped high in the air to beat goalkeeper Diogo Costa to score a beautiful header that sent the Portuguese packing. Despite bringing five-time Ballon d’Or winner Cristiano Ronaldo in the 50th minute, the dominating Fernando Santos team was not able to find the back of the net.

Morocco has only conceded one goal(an own goal) in the tournament so far, a credit to their defense manned by goalkeeper Yassine Bounou.

But would they keep up with the speed of Kylian Mbappé and the goal-scoring experience of Giroud?

While France squeezed past England in the quarter-finals after Harry Kane’s second penalty went off target, two of the four previous meetings between France and Morocco ended in stalemates.

With players like Mbappe, Olivier Giroud, Antoine Griezmann, and Ousmane Dembélé, the France team is talent-packed and is aiming to retain the title they won four years ago. But Hoalid Regragui is relying on the passion being displayed by his team to win the world cup.

“We are becoming the team that everyone loves at this World Cup because we are showing that even if you don’t have as much talent if you show that desire, heart and belief, you can achieve,” he said in a post-match conference.

He added, “I am sure many of you will say this is a miracle, but we have won without conceding against Belgium, Spain, and Portugal, and that’s the result of hard work.”

Catch Morocco battle for a spot in the final of the FIFA World Cup 2022TM in Qatar tonight on Showmax Pro to catch up on the action in HD or in 4K ultra-high definition. Sign up at www.showmax.com.