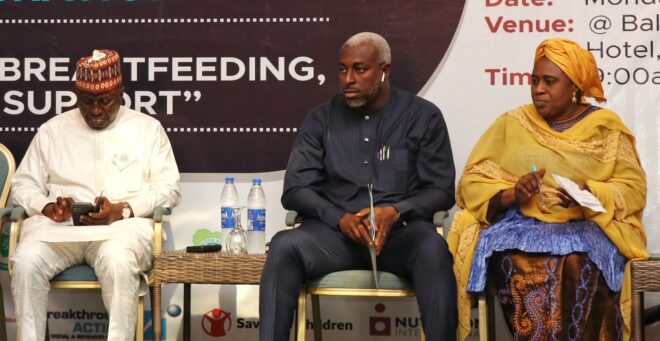 Stakeholders meeting to celebrate World Breastfeeding Day, (WBD), in Abuja, yesterday, have called for the creation of safe spaces in workplaces to promote breastfeeding in nursing mothers.

Chairman, Senate Committee on Health, Senator Ibrahim Oloreigbe, said there it is important to provide safe spaces, and an enabling environment, in workplaces both in formal and informal sectors to promote breastfeeding especially exclusive breastfeeding.

He said a lot of women breastfeeding are working mothers therefore it is important that institutions both private and public, establish breastfeeding corners in the workplace to encourage exclusive breastfeeding for improved maternal health.

“We recommend early initiation of breastfeeding within one hour of birth, exclusive breastfeeding for the first six months of life, continued breastfeeding up to two years of age or beyond, is nutritionally adequate and safe,” he said.

Oloriegbe, while advocating for the passage of law and implementation of six months of maternity leave for mothers, said “we need to double our work, I wouldn’t know why it is delayed, we need to see it done because it is one thing to have a law and it is another thing to implement it.

“And unless we have enforcement and supportive system mechanism, we will not be able to have exclusive breastfeeding at the level we want it.’’

The Minister of Health, Dr. Osagie Ehanire, has said the Federal Government is targeting an increase of 50 percent in the rate of exclusive breastfeeding before the 2025 World Health Assembly.

Represented by the Minister of State for Health, Joseph Ekumankama, he said the federal government is committed to ensuring cost-effective means of eradicating malnutrition,

“Our aim is to achieve the 2025 World Health Assembly target of raising the rate of exclusive breastfeeding to at least 50 percent.

The Minister of Women Affairs, Mrs. Pauline Tallen, said the 2022 theme of the WBW, ’Step Up for Breastfeeding: Educate and Support’ is aimed at educating the public on the necessary knowledge, attitude and skills to support breastfeeding women.

Tallen, who was represented by Mrs. Christine Oliko, Deputy Director, Women Development, called for the need to strengthen, protect, promote and support breastfeeding for the survival, health, growth and development of the child.

According to him, “the rate of exclusive breastfeeding in Nigeria was 17 percent in 2018, increased to 29 percent by 2021, according to national surveys but that is still far short of the 50 percent target by 2025 set by the World Health Assembly.

While speaking on the revised national guidelines on the baby-friendly initiatives, Dr. Victor Ajieroh of the Bill and Melinda Gates Foundation, said the foundation had commenced implementation of the Accelerating Scale of Maternal, Infant, and Young Child Nutrition (ASMIYCN) project in Kaduna, Kano, Sokoto, Borno, Bauchi, Yobe and Lagos states.