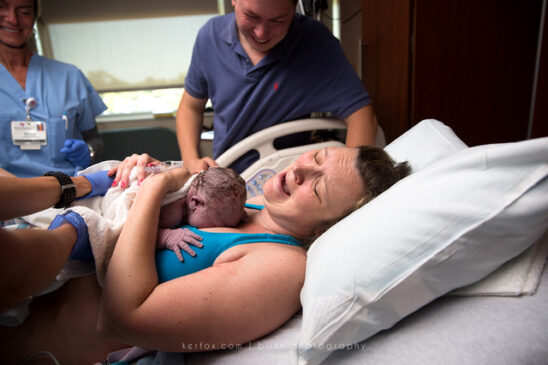 This new mom posted a TikTok video where she revealed that she burst blood vessels all over her face from intense pushing during labor while giving birth to her son.

TikTok Yelena von Breymann (@yelenaa.x) is a busy new parent and lifestyle influencer who often shares beauty, fashion, and wellness content, as well as her postpartum recovery since giving birth to a baby boy.

Recently, von Breymann posted a video where she shared that blood vessels in her face, neck, and eyes burst from pushing so hard during the birth of her son, and based on the comments, this is more common than most would think.

The clip begins with a shot of von Breymann holding her newborn, who’s fast asleep on her chest.

In response to a viewer’s question from another video where she posted the broken blood vessels, von Breymann explains that this is “definitely something that can happen from the pushing.”

She says that the bruises went away after about two weeks before showing viewers a picture of herself soon after the birth, warning, “Don’t be scared because it was really, really, bad.”

Recreate Tinashe’s striking In The Know cover makeup look with these products:

The clip cuts to a photo of von Breymann, whose face and neck are covered with broken blood vessels that look like tiny purple freckles.

“So yeah, I definitely didn’t get that cute hospital photo of my baby,” von Breymann joked at the end of the video.

While some viewers could relate to the experience, others were startled.

“I gave myself black eyes and busted blood vessels in one eye. I pushed way too hard,” one parent mentioned.

Viewers who’ve never even given birth could relate to von Breymann’s experience.

“This happens to me whenever I throw up,” noted one user.

Giving birth, or getting sick for that matter, is no joke, but it’s incredible how quickly the body can heal itself from such an intense experience.