The German theologian, Prof. Motlman, rightly stated that “it is not the idealistic concept of none violence that is in consonant with the Gospel, but a responsible action of love.” It is a misunderstanding of the Christian Gospel of nonviolence for a man to passively watch a rampaging lunatic break into his house and bludgeon his son to death and rape his wife. The Christian belief demands that such a man, driven by his love for his family, fight off the lunatic. So, while Christianity is not an incendiary creed, Christians must have the courage to take a responsible action of love, be it in defense of family, nation, justice or the Truth. 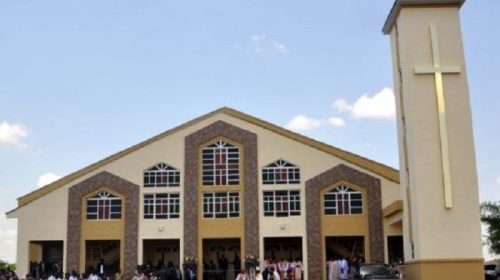 The Nigerian religious elite, in spite of their much vaunted born again credentials and self-professed oracles of God, failed to escape the decadence that gripped the Nigerian society. So, like the Nigerian power elite, the men of God are entrapped by greed, falsehood and other aspects of the moral squalor that engulfed this country. Like the political class, they, in deliberate oblivion to the poverty and suffering that pervade the lives of most of their church members, live in breathe-taking opulence. They live in expensive mansions, own fleets of cars, and even jets, while some of their members live 10 in a room in ramshackle houses and cannot afford one meal a day and basic medical services. In their selective amnesia, they chose to forget the Christian precepts of charity and care for the poor and needy.

READ  Pastor Adeboye, CAN Protest Against Growing Insecurity In Nigeria

As such, they lack the moral authority to censure the power elite for their anti-people policies, corruption and downright thievery. Instead of being Spirit-filled, fearless and daring warriors for social justice, equity and elevated moral and ethical standards, they are toadies, lickspittles and apologists of the ruling class. They convolute the Christian Gospel not only to fleece their members and justify their ostentatious and profligate lifestyle but also to nudge the people into docility and servility. In line with the desire of the ruling class to hold the people in subjugation, men of God are goading their members to passivity. In an edition of the Rhapsody of Reality, Pastor Chris Oyakilome urged his readers not to complain (against irresponsible and inhumane government policies and their ramifications), but to make efforts to improve their circumstances.

Christians, not complain? That is nonsense, monumental nonsense. It is un-Christian, actually, sinful to not complain and take an uncompromising stance against bungled governance, misappropriation of public funds and extravagant lifestyle of the Nigerian politicians and the impoverishment and suffering they visit on Nigerians. Interestingly, it is Christianity that provided the philosophical underpinnings for democracy. The basic values of Western civilization, including its form of politics, democracy, were informed by three heritages: liberty from the Greek, legalism from the Romans and Christianity from the Jews. But does not the Christian doctrine of the equality of all men before God, fairness and impartiality subsume the Greek ideal of individual worth and liberty and the Roman concept of the equality of all men before the law? Therefore, it is Christianity, more than any other belief that furnished the philosophical foundations for democracy.

Democracy recognizes that power belongs to the people. And that those, whom the people have elected, that is, entrusted with the power to rule over them must be accountable to them. How then can a man of God in his right mind urge Christians in a democracy not to demand accountability from those they have authorized to govern them and to censure the actions of these governing elite when they fail to respect the collective will of the people?

Moreover, the history of the Christian faith is suffused with Christians, in responsible actions of love, speaking out and acting out against forces of greed, wickedness and injustice. It was in a responsible action of love for the divine word (which stipulated that the house of God shall be a house of prayer), that Jesus Christ complained against the activities of the money changers and thieves within the temple and also, drove them out the temple. In Matthew 23, he criticized the Pharisees and Scribes for their hypocrisy and perversion of the Truth.

It was the audacious and selfless challenge of racial injustice by Black American men of God led by Martin Luther King Jr. that got America attempting to live up to her creed: the equality of all men, irrespective of color and creed. “In the early Hanoverian period”, the British historian, George Warner, wrote, “Britain had sunk into a condition of moral apathy rarely paralleled in her history”. It was John Wesley, a religious leader turned social reformer, that roused the country from her moral apathy and got her showing increased kindliness and genuine commitment to alleviate poverty and suffering amongst the masses.

READ  Isese Festival: Our Leaders Should Be Sworn In With Deities, Say Traditional Worshiper

Therefore Nigerian Christians have civic, moral and spiritual obligations to complain and protest against the arrogance of power, misplaced priorities, corruption, theft of public funds and scorn for the Nigerian masses of the ruling elite.  Complaints, strategically directed complaints, and agitations are potent weapons that must be employed against bad leadership in Nigeria.

The Nigerian situation must scandalize and outrage any sane individual .Only an impulsive liar, a shameless opportunist or an avowed hypocrite can insinuate that all is well with the Nigerian system or that the Nigerian situation does not call for dramatic or, even, violent solution. Therefore, it is the refusal to complain against the evil rulers of this country who are running this country aground and making life unbearable for the generality of her people that is a sin, a mortal sin.