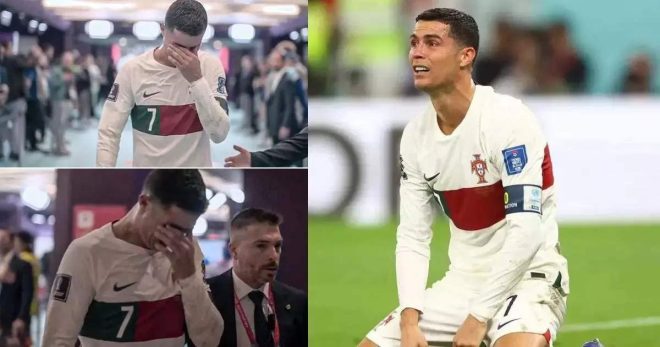 Cristiano Ronaldo was reduced to tears as he left the pitch moments after Portugal became the latest team to suffer a seismic World Cup shock at the hands of history-makers Morocco on Saturday.

The Portuguese star had been dropped for the quarter-final – for the second time in succession – but was brought on by coach Fernando Santos in the 51st minute with his side chasing an equalizer following Youssef En-Nesyri’s late first-half goal.

But Morocco, who beat Spain in the last 16 after a penalty shoot-out, held out to spark wild celebrations for the African side at the final whistle.

“It’s crazy,” said Moroccan winger Sofiane Boufal. “We’re living and dream and we don’t want to wake up. I have goosebumps.”

Conversely, Ronaldo was filmed in tears as he immediately walked down the tunnel and into the dressing room escorted by a Portuguese official, leaving his teammates to take in defeat.

After 118 goals in 196 matches for his country, it is not yet known whether this will be the 37-year-old’s final appearance for Portugal.

There was one respite, with Ronaldo’s 196th cap equalling the men’s world record of Kuwait’s Badr Al-Mutawa

Ronaldo is currently without a club after his contract with Manchester United was terminated last month.

Meanwhile, Morocco’s remarkable journey continues. In Doha, they have only conceded once, to Canada, in five World Cup matches so far in reaching the semi-finals, against either France or England.

Morocco coach Walid Regragui praised the battling spirit of his squad as they moved to within one match of the final.

“We came up against a really great Portugal team,” Regragui told France’s TF1. “We’re drawing on all we have, we still have guys injured. I told the guys before the match we had to write history for Africa. I’m very, very happy.