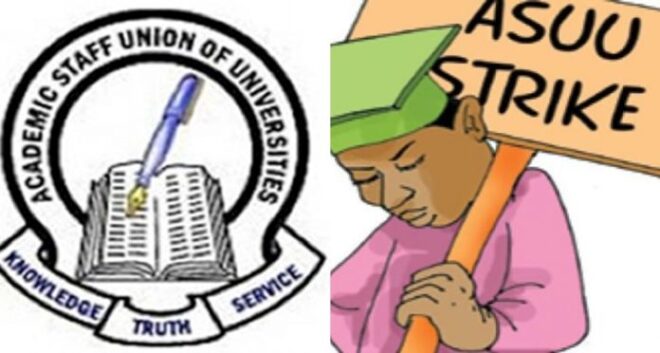 The President, of the Academic Staff Union of Universities (ASUU), Prof. Emmanuel Osodeke has said that the union is willing to end its seven-month-old strike.

Osodeke, however,  said this could only be achieved if concrete agreements were reached with the Federal Government.

Osodeke gave the assurance in Abuja on Thursday at a National Town Hall Meeting on Tertiary Education tagged: ‘ The Locked Gates of our Citadels -A National Emergency.’

Recall that the union embarked on industrial action on Feb.14, making it over seven months since public universities across the country were closed down.

The Federal Government recently sued ASUU at the industrial court in an attempt to end the strike.

“On all these issues, we have given the government a minimum that we can accept, but they have not responded on the issue of revitalization, on the issue of earned allowance and on issues that we have all discussed.

” We negotiated and agreed that they should sign and this is very simple, not more than one day.

” On UTAS and IPPIS, we say release the report of the test you did and let’s look at the one who came first and take it as we agreed.

” So we have given them the minimum we want and we have to come down and they can do it in one day if there is a will,” he said.

Osodeke, therefore, reiterated the union’s commitment to return to school if the Federal Government puts its proposal on the table, saying that negotiation could be reached if the government was willing.

“If the government loves this country, these children and their parents, then they should come to the table and let us resolve these issues in one day.

“Just as we did in 2014, they should come and ensure that we do that, we can even have the meeting openly so that Nigeria will see what we are discussing,” he said.

The ASUU president expressed sadness over the lingering strike resulting in the government taking the union to court.

He said that suing the union was not an option as it would further worsen the situation of the students and tertiary education in the country.

He said that if the court forces the lecturers to return to school, they won’t force them to teach with open minds, saying that the students would definitely be at the receiving end.

He, therefore, called on parents and students to appeal to the government to do the needful so that the strike would come to an end once and for all, rather than attacking the union.

Meanwhile, Mrs. Vivian Bello, Convener, Save Public Education Campaign, an NGO, pleaded with both parties to resolve the problems saying that the students are not the only people feeling the negative impact, but also the union.

Bello said that it behooves both sides to bring the crisis to a perpetual end for the sake of the students as well as the development of education in the country.

” We are going to play our traditional role which is the role of monitor.

” We are going to keep a very strong searchlight on the two actors- both in the government and on ASUU, in order to see that this issue of back and forth is quickly brought to an end the strike will be called-off,” she said.

Some of the contentious issues that led to the strike by the unions include the non-release of the revitalization fund, non-payment of earned allowance (or earned academic allowance), renegotiation of the 2009 Agreement, and the release of a white paper for the visitation panel.

Others are the non-payment of minimum wage arrears and the inconsistency occasioned by the use of the Integrated Payroll and Personnel Information System (IPPIS). (NAN)