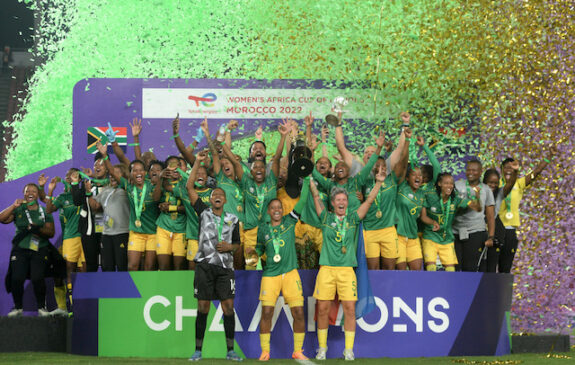 South Africa has enjoyed a magnificent run in the competition so far, enjoying a 100-percent record at the Wafcon while conceding just twice.

They dispatched Nigeria’s Super Falcons in their opener a rematch of the 2018 Nations Cup final, which was won by the West Africans before seeing off Botswana and Burundi in their group stage.

Tunisia and Zambia were then seen off in the knockouts albeit by narrow margins with South Africa struggling to discover their attacking vigor after losing talisman Thembi Kgatlana to injury.

Without their star striker, the likes of Jermaine Seoposenwe, Linda Motlhalo and rookie Nthabiseng Majiya have all stepped into key roles, helping Desiree Ellis’s side edge their way to the final.

While South Africa has previously reached the five Nations Cup finals, the women’s team has never before brought home the gold.

In Morocco, they face stern opposition, and not simply because of the partisan home support in Rabat.

The Atlas Lionesses also enjoyed a perfect record during the group stage, seeing off Senegal, Burkina Faso and Uganda, before Botswana was eclipsed in the quarter-finals.

Things were tougher against the Super Falcons in the semis, with Morocco unable to net the winner despite their opponents being reduced to nine players, although the North Africans eventually progressed on penalties.

Morocco secured a 2-1 victory over South Africa in their opening match in the 2023 Afcon qualifying Group K.