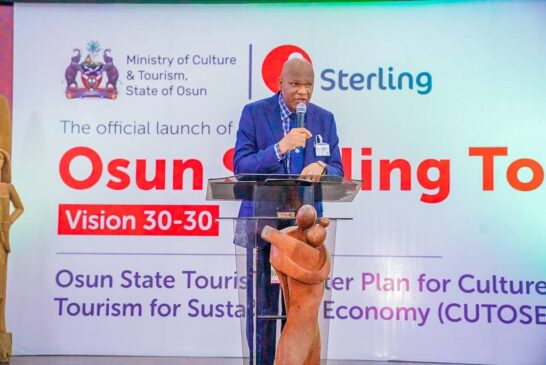 The Osun State Governor, Adegboyega Oyetola, has reiterated the administration’s determination to transform the economy of the State through huge investment in culture and tourism, saying Osun would soon become the United Arab Emirate of Nigeria.

He said the administration was determined to provide leadership in domestic and international tourism in the country, adding that workable culture and tourism policies had been incorporated as part of the Culture and Tourism for Sustainable Economy agenda, Osun Sterling Tourism Vision 30-30.

Governor Oyetola made the pledge at the official launch of Osun Tourism Master Plan: Culture and Tourism for Sustainable Economy (CUTOSEC).

He said the Master Plan was aimed at improving the potential in the culture and tourism sector for the development of the State, adding that the initiative involved a comprehensive template to expand the State’s economic diversification program and improve its Internally Generated Revenue.

“It is our resolve as a government to deploy these potentials into maximum use and turn our dear State into the United Arab Emirate of Nigeria.

“As tourism progressively raises its profile in national economic planning, there is a clear need to ensure that attention is paid to its long-term development potential.

“Such an approach demands comprehensive strategic planning for the industry’s future. As a government, we are keying into that by laying a solid foundation for better Nigerian Tourism.

“Our development plan for tourism involves two-time horizons – the short and long terms. While Osun Sterling Tourism Vision (OSTOV) 30-30 is the short term agenda that we wish to achieve to lay a solid foundation for the perfect growth of tourism in the State, the Culture and Tourism for Sustainable Economy (CUTOSEC) is the long-term plan that will build on the achievements of Osun Sterling Tourism Vision 30-30 for the permanent development of tourism.

“All our efforts today are to bring investors to this State for a mutually-beneficial engagement. Given its importance, the State has produced an investment manual, developed a unique tourism investment model, and published available investment opportunities in our sites like Olumirin Waterfall, Ayikunnugba Waterfall, Owala rivers, Kiriji war sites, and other viable opportunities as part of the Culture and Tourism for Sustainable Economy documents.

“It is our resolve to develop a home-grown Public-Private Partnerships Investment Model that will take care of the immediate needs of the stakeholders and pledge a promising future for the participants.

“Our model addresses the key issues of land, reward system, tax matters, etc., and provides the basis of relationship with communities, employment, and social responsibility to the community. We are open for negotiations on our offer,” he added.

According to him, the development of agri-tourism would assist the government in its resolve to support the citizens, particularly the youth through the promotion of training and certification programs and the introduction of young people to agriculture and the environment.

While noting that the administration places a high premium on youth, Governor Oyetola said, “We shall create wealth for them, rehabilitate those that deserve it, and use them not only as agents of resuscitation of our culture going into extinction but as a tool to perpetuate our cultural heritage.

“We shall consciously encourage them to see tourism as a bailout of unemployment tangle.”

Recall that Osun state Government has announced plans to launch a tourism master plan known as ‘Culture and Tourism for Sustainable Economy’ (CUTOSEC).

The program supposes to be in collaboration with Sterling Bank Plc, Goge Africa, African Union ECOSOC, and La Campagne Tropicana.

The Governor of Osun State, Adegboyega Oyetola who disclosed this in a statement before lunch, said the event would kick-start the aggressive implementation of plans that would make Osun Sterling Tourism Vision (OSTOV) 30-30 a reality.

According to the governor, OSTOV 30-30 would involve the development of 30 projects that include the development of sites and programs across the state into premium tourist destinations by 2030. This will make Osun the foremost tourism hub in the country while creating a future of shared prosperity for citizens of the state.   He said Osun State has abundant but untapped resources which the state government plans to develop in partnership with players from the private sector.

“We have decided to partner with Sterling Bank Plc and other players in the tourism sector to activate the potential of the state to attract tourists from within and outside Nigeria.

“We are home to several important landmarks that form part of the heritage of the Yoruba people and we are also blessed with many natural endowments that are capable of attracting more than five million tourists annually.

It is our hope that Nigerians and foreigners alike would come on pilgrimage to the state from 2021 to visit the various tourist sites that we have earmarked for development in our master plan,” the governor said.

In his own speech, Minister of Information and Culture, Alhaji Lai Muhammed commended the administration of Governor Adegboyega Oyetola for developing the Master Plan, describing the initiative as a right step in the right direction. Lai Muhammed who was represented by DG/CEO Centre for Blacks and African Arts and Civilisation (CBAAC), Hon. Oluwabunmi Ayobami Amao said the initiative would go a long way to give a real direction in the development of tourist centres and make Osun the best destination.

According to him, the initiative would also help to unlock the numerous potential of the State for socio-economic development and by extension generate employment for the citizens.

Earlier, the Commissioner for Culture and Tourism, Dr. Adebisi Obawale, in his welcome address said the huge economic gains awaiting investment in Culture and Tourism had compelled the immediate need for the master plan which would be funded through Public-Private Partnership (PPP)

He said, “The abundant opportunities of our heritage and tourism potential and the inherent benefits, such as creating mass employment especially for our teeming youths, revenue generations, and socio-economic development of the arrays of sites locations and the State in general, have made this Government prioritize the sector as one of the economic pillars to drive the State economy.

“A few months ago, a team of investors and financial Institutions visited the State and having gone round some tourist attractions, we’re impressed by the enormous human, cultural and natural resources the State is bestowed with; and realizing this, the team had since expressed her willingness and a strong commitment to developing our tourism attractions to World-Class Destinations.”