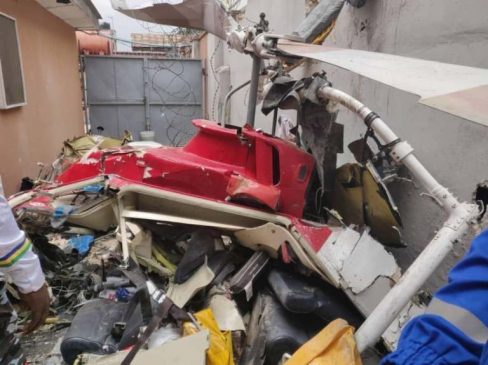 Three persons have been feared dead, another has been hospitalized after a helicopter crashed into a building in Opebi Lagos.

Waka About Africa has it that the helicopter marked HEL-BEL 206 with three people on board crashed into the Opebi area of Lagos State.

The helicopter with registration number 5N-BQW was said to have originated from Port Harcourt for a yet to be disclosed mission and the identities of the three onboard too unknown.

The hospitalized victim is in the Intensive Care Unit of the Lagos State University Teaching Hospital while the bodies have been deposited at the morgue.

It was gathered that the helicopter was a private one before it crashed into the premises of No 16A, Salvation Road, Opebi, Ikeja on Friday, August 28.