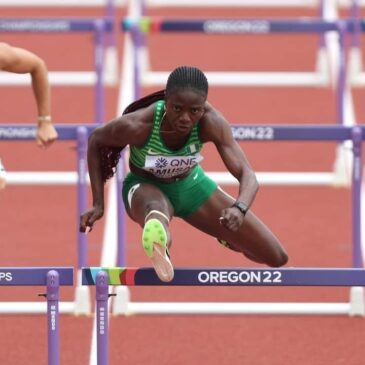 Nigeria’s Tobi Amusan set a new world record in the women’s 100m hurdles at the World Athletics Championships in Eugene on Sunday.

In the first track event of the final session of the 10th day of competition, Amusan streaked to a winning time of 12.12 seconds in the first of three semi-finals.

It smashed the previous best of 12.20sec set by American Kendra Harrison in 2016. Harrison was also in the first semi-final, finishing second in 12.27sec.

The previous championship record was 12.28sec set by Australian Sally Pearson in Daegu in 2011.

Amusan had set an African record of 12.40sec on Saturday to win her heat, the fastest first-round time in world championships history.

“I wanted to get out and go,” said the 25-year-old Nigerian.

“I did what I had to do. Now I’m looking forward to the finals.”

Joining Amusan and Harrison in the final, scheduled for 0200 GMT, will be Olympic champion Jasmine Camacho-Quinn of Puerto Rico, the Jamaican pair of Britany Anderson and 2015 world champion Danielle Williams, American Alia Armstrong, Devynne Charlton of the Bahamas and Briton Cindy Sember.