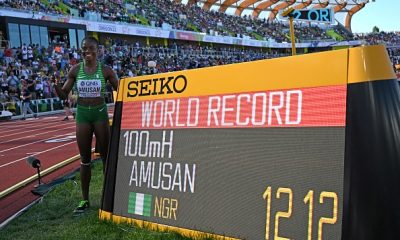 Tobi Amusan ran an incredible 12.40 seconds in her opening performance at the World Athletics Championships in Oregon, USA to set a new African record and Nigeria’s fastest time in the history of the competition.

The petite hurdler’s time is two-hundredths of a second faster than the 12.44 seconds Glory Alozie ran to win a silver medal in the event 23 years ago in Seville, Spain.

Amusan, who is gunning for her first World Championships medal after finishing fourth three years ago in Doha, Qatar threw down the gauntlet in her first race in the event and topped the list of qualifiers for the semifinals scheduled for the final day of the championships.

The Nigerian has now made the semifinal of the event three times which is an extension of her record as the only Nigerian female 100m hurdles runner to make the penultimate round of the competition.

Amusan has also smashed four of the six records Alozie set before switching allegiance to Spain after the 2000 Olympics in Sydney.

Amusan broke the Games record twice in 2019 in Rabat, Morocco. She ran 12.69 seconds to win her semifinal heat before running a hundred of a second faster in the final to win the gold.

Next was the 12.68 seconds Alozie ran twice to win a silver medal at the 2000 Olympics which made her the fastest Nigerian in the history of the quadrennial event. Amusan smashed that in 2021 in Tokyo with her 12.60 seconds performance which fetched her a fourth-place finish in the event.

The reigning Commonwealth Games champion also consigned to history the 12.44 seconds Alozie ran at the Monaco Diamond League in 1998. The time, which also doubled as the African record at the time was the fastest by a Nigerian in the history of the event until September 2021 when Amusan ran 12.42 seconds to achieve a treble.

First, she ran the fastest time by a Nigerian in Diamond League history. She smashed an African record set in 1998 and became the first and only Nigerian, man or woman to win a Diamond League discipline title.

Two other records by Alozie that will be within the sight of Amusan are the 7.82 seconds Nigeria nay African record over the 60m hurdles (indoors) set in February 1999 and the 12.77 seconds African Championships record set in Dakar, Senegal in 1998.

Amusan holds a personal best of 7.84 seconds in the 60m hurdles and was denied a new African Championships record in Mauritius last month by an excessive tail wind (+4.0m/s) which rendered her 12.57 seconds run illegally.