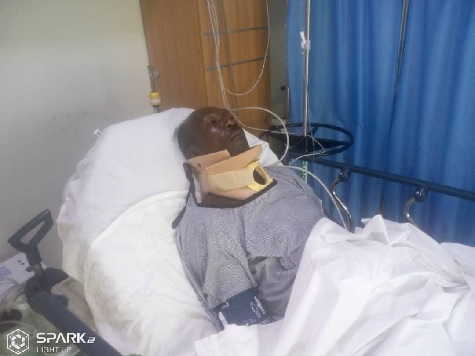 Thomas Aririguzo needs urgent help, this was said by his elder brother who raised the alarm at the Waka About Africa Office, saying Thomas is in need of N5 million to help him seek medical treatment.

His brother, Cyprian Aririguzo, has shared a series of photos of the Aluminum Roofer on his social media pages to solicit support to get him back on his feet.

Thomas Aririguzo is still battling for his life in hospital, two years after the fall from a one-story building and had a spinal injury accident.

He currently requires $10,000, about N5m, to pay for his medical expenses. The hospital has placed his medical treatments on hold until the money is paid. His wife, Mrs. Akudo Aririguzo, revealed this in a recent interview with Waka About Africa team, says

Thomas is a father of four who had a spinal cord injury, a hard-working and industrious person who learned different skills to take care of himself, family and others.

We have taken him to many specialist hospitals among them are Memfys hospital and the cost is over N5,000,000.00 (five million naira ) we are appealing to kind-hearted individuals, cooperative organizations, religious bodies, politicians, etc to kindly come to the aid of Thomas Aririguzo.

Thomas, who is best known for his many skills, is an Aluminum Roofer expert, in a Building Material businessman while he was Roofing on a story building he fall and had a spinal injury since then the family and friends have done a lot to keep him alive. 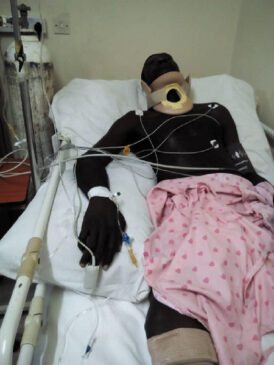 Thomas’s brother Cyprian, wife Akudo, the children who are still little and his family are appealing to kind-hearted and well-meaning Nigerians  to kindly come to the help of Thomas Aririguzo who need urgent financial assistance to receive medical treatment in a bid to avert the amputation of his legs or been bedridden

Thomas now in a vegetative state for about two years because he suffered a traumatic injury and needs help. His brother said the hospital bill of N5 million will cover physiotherapy and other necessary treatments.

In the video and pictures, his brother, wife and others could be seen pleading with the general public to help to raise the required funds to complete Thomas’s treatment. ‘They said he currently requires N5m to complete his medical treatment’.

The Roofer looked pale and unrecognizable in the pictures and can be seen lying helplessly in the hospital bed.  They said Thomas’s treatment has been halted because his family has run out of funds.

According to his brother, Roofer needs over N5 million Naira help to be able to take his treatment, pay for hospital bills, and feed.  The cost of “The treatment, feeding, physiotherapy, daily care, has been accruing since the accident, as at press time, no amount has been raised.

“Calling on businessmen, Politicians, Pastors, philanthropists, civil societies, health foundations and well-meaning Nigerians to come to his rescue, and his family at this trying time. The Aririguzo’s family will be so grateful no matter how little”, the brother said.