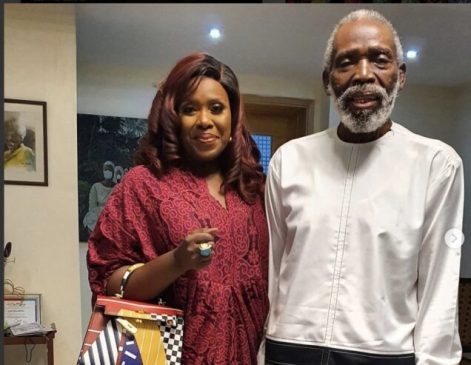 Joke Silva Nollywood actress and wife of actor Olu Jacob has revealed how she is able to manage the health of her husband.

Recall that the actress acknowledged that her husband, Olu Jacobs, was coping with dementia caused by a Lowy body.

She revealed that her spouse “doesn’t comprehend what is going on” and has been battling the illness “for a couple of years.”

In a recent interview with Mercy Johnson on her Youtube cooking show “Mercy’s Menu”, Joke Silva revealed how his illness has affected her and how she is able to manage it.

According to Joke Silva, they make an effort to seek religious and spiritual support, but the only way she is able to deal with it is to accept it as her new reality.

She said, “Well for me, it’s getting to the place of acceptance.

“You know when our partner starts making some changes, then you are asked to seek natural and religious help.

“And then you doing everything you are been told to do, and it’s almost like the patient is getting worst.

“But when you get to the stage of acceptance, that this is your new reality, it’s so much easier.

“You are working with your partner and you meet them where they are, it is much easier.”