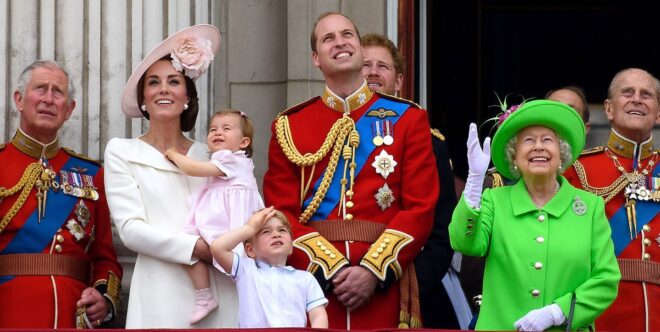 The Queen has reportedly formed a new “firm of eight” with very specific senior royals.

She apparently thinks “one must be seen to be believed” so expect this group to attend events together going forward.

The British royal family has spent much of 2020 doing solo appearances amid the coronavirus pandemic, but it sounds like we could see more group gatherings as we head into 2021 thanks to the Queen’s new “firm of eight.”

Queen Elizabeth II has picked a select group of eight senior royals to make public appearances together in order to abide by her personal rule of “one must be seen to be believed.”

Missing from this list are Prince Andrew his daughters Princess Eugenie and Princess Beatrice, Prince Philip who has retired from royal engagements, and of course Meghan Markle and Prince Harry who stepped down from their roles as senior royals and currently live in America.

The Queen’s new “firm of eight” was seen for the first time at the end of Kate and William’s royal train tour and the reports that it was the Queen’s idea to get everyone together on the steps of Windsor Castle where she has been spending time amid the pandemic.

A royal source said: “The family is united in exploring the possibilities in working with each other to highlight the causes dear to their hearts, helping each other and the country at the same time

They are working on opportunities for next year and beyond already. As soon as they are able it will be all hands on deck to make up for the lost time. The Queen has often said they ‘need to be seen to be believed’ this is coming from the very top.”

ArmedForcesRemembranceDay: Nigerians Sends Out Messages Of Love In Honour Of Servicemen Of The Nigerian Armed Forces.

She get di news while she bin dey NYSC camp and na proof say dreams dey come true as she bin dey determined to get first class and work...
View on Facebook
· Share

Heirs Holdings’ strategy of creating the leading integrated energy business in Africa is executed through a series of strategic portfolio...
View on Facebook
· Share

The Minister gave the definitive re-opening date during an inspection of repair work on major roads and bridges in Lagos...
View on Facebook
· Share

ArmedForcesRemembranceDay: Nigerians Sends Out Messages Of Love In Honour Of Servicemen Of The Nigerian Armed Forces. | Waka About Africa

Nigerians have taken to social media to honor both fallen heroes and those who are still giving their all to ensure that the walls...
View on Facebook
· Share