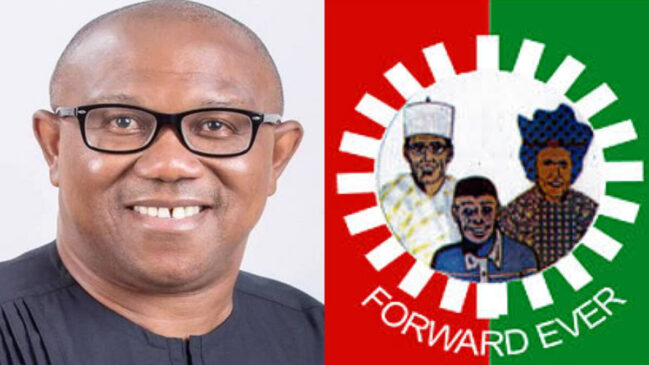 Mr Peter Obi is not a “Doctor,” nor is he a “Chief” – he is just simply “Mister” – and that is what first fascinated me about him. He is not burdened by titles.

He is not the typical Nigerian “big man”, who in the very large scheme of things is actually mostly an empty barrel. Compared to other public leaders of comparable societies, those who have arrived to be public leaders in Nigeria in this generation are really the second rate. They have very little class.

They have poor intellectual training. They are not effective communicators. I mean, we have long accepted the English language as our national language, and have received our education in that medium. But listening to 95% of our current public leaders, reveals a most embarrassing and astonishing lack of preparedness at the highest levels, of effective use of language. I mean, without access to, and effective use of the language with which national life is conducted, how do you do policy; how do you prepare legislation; how do you conduct diplomacy; how do you communicate the most complex ideas to the public, and preserve the narrative of government for the national archives? That is one evidence of mediocrity? It is tough for instance, listening to Tinubu.

It is evidence of poor education which seems prevalent among the current category of people who ran to politics in the last twenty years, took charge, and quickly locked the gates. I once heard a very notable politician from the South East on TV throwing up a shitload of highly volatile and embarrassing howlers. It was cringeworthy! I felt even bluer under the chin because this fellow had been ahead of me at the Government College Umuahia. At Umuahia, he was known for “hauling topi” even as a Captain in the school.

This was a cardinal sin. My old school emphasized dexterity both in the written and the spoken aspects of the primary language of instruction – the English language. We hummed under our breaths in objection if, especially a senior, much more a Captain at School, committed the faux pax of language we called “Topi.” There would be such a loud hum in the Assembly, for which one “white shirt” of a captain, one day came to Assembly threateningly saying, “No huh-huh-huh!” to squelch junior students’ protest against bad English. Go figure who! Umuahia even had a rule against the use of what it called “Vernaculars” – which I did not necessarily agree with, but which aimed to keep the very multiethnic and international students body at the Government College, communicating effectively, and interculturally in brilliant English.

The Masters tried even to drill phonetic purity into our conversations. Like the famous history master, Mr Iheukwumere, who one day stopped the Assembly singing, “Glory, Glory, Alleluia!” and bellowing, “It is not glory. It is GlEry!  But as we like to say amongst ourselves, “OUK went to Umuahia, but somehow, Umuahia did not go through him.” And it shows. And that’s saying something. Needless to say, OUK is not the subject of this column today. He is just an example of how for long, the best of my generation has lacked conviction, while the worst among us have been full of passionate intensity, and thus mere anarchy is loosed upon our land, in pure Yeatsian terms. And speaking of passionate intensity, the presidential primaries of the parties have finally come, and they have yielded the candidates of the parties whom they would field for the presidential election of 2023. Suddenly, 2023 is right around the corner. It is real. Too much is at stake here. First, is that these very dark and catastrophic years of the Muhammadu Buhari presidency will go down as the worst years of the plague for Nigeria in living memory.

It has thrown Nigeria – this once hopeful country – into the deep end of the gutters. Poverty ravages the land. Disease. Hunger. Pestilence. Violence has never before been experienced. The Four Horsemen of the Apocalypse ride now brazenly through Nigeria, invited to this land by the All Peoples Congress, the APC, whose reign under Buhari opened the crypt of the demons and unleashed them on Nigeria without compunction. In practical terms, as the Debt Management Office has revealed to Nigerians, this country has borrowed itself into slavery, and unless it recruits as its next president, an effective manager of resources and perspicacious leader who is prepared to roll up the sleeves, and mobilize Nigerians to get themselves out of the ditch, this country is doomed.

I use the word “doomed” with emphasis. All we need to do is look at the figures. Already the Chinese are at our doorsteps, with the ceding only recently of the operations of the Nigerian Customs to them. That is stage one of cancer. Whatever remains of the public investments that make Nigeria a sovereign nation will either be sold off or taken by creditors from whom this government has borrowed to pay for its own pleasures and insanities.

One day, not log from here, Nigerians will see themselves paying tolls to some foreign company to travel on Nigerian roads. This is the situation – the hard truth no one is telling about our real situation. The most wicked thing is that the Nigerian ruling oligarchy which has brought the country to this sorry pass all have their exit plans: they have stashed wealth and built or bought palaces of pleasure in foreign lands where they and their families would escape. Many of them already live out of Nigeria, but run the affairs of Nigeria. The Presidential candidate of the PDP, Mr Atiku Abubakar, for instance, spends almost all his time in Dubai. He is likely to conduct the business of government more from Dubai than from Abuja if he is elected.

Tinubu has all the resources to secure a plot of the most exclusive real estate on the moon. But how did they make all this wealth that secures them an exit card when the entire nation bleeds? Who is funding their Noah’s Ark project? To whom do they want to leave the fate of Nigerians who live in a toxic cage created by these men and their handlers? Fact is, Nigeria is in really bad shape. I’m not quite sure why anybody would want to be president after 2022. Fact is, neither the APC nor PDP is in this business to uplift Nigeria. Our recent history proves this.

It does seem that what these oligarchs want to do is to slice up what is left of Nigeria’s public assets, share it, secure their families, escape from the hell they have created, and condemn those who are left behind to burn in the Hobbesian cage, in which the strong will carve out territories, recruit and arm hungry and disenchanted youth, and govern the fragments of this nation. The beast is already slouching towards our Bethlehem. Small Islamic republics will emerge; new Biafras; places like Lagos will be carved up into cantons run by “Area Fathers.” This is the fate that awaits Nigerians if they make the mistake of electing Atiku or Tinubu. Why? Because a man who spends billions of personal funds buying up the ticket to contest for president is not looking to do public service. He is investing his money and will look to make a profit.

That is why some hope exists in Peter Obi, who saw it all, and took himself out of the business of buying up delegates, opting rather for the Labour Party – the party of the people who will suffer if the “dollarized” Oligarchy find their way back to power. There is shaping, a real powerful movement, from where I stand, by those who already sense that they will suffer the fate of new slavery if they do not rise, and step away from the same-old, same-old prebendal politics of ethnicity, and vote for the survival of their generation and their nation.

A few pundits have continued to argue that the Labour Party has no structure and that Peter Obi, their presidential candidate is actually not ideologically attuned to Labour politics, which presumably is left of the center. First, the Labour party is proving to be a large party with a large tent; which like the British Labour Party, could contain an Aristocrat like Clement Atlee, and a working-class Coal miner like Aneurin Bevan, who actually became the British Health Minister and founder of the modern British National Health Services. No contradictions. Just shared common visions. It is also not true that Labour has no structure.

It is growing to be a people’s movement. People make up the structure of an organization. Many Nigerians are turning up, registering online and physically for the Labour Party. The physical structures are easy to build. It requires the renting of offices, and hiring of strategic personnel, field staff and volunteers. In the coming weeks, the Labour Party Campaign Organization should be able to put to use, and re-purpose the field structures of the various Labour Unions – their offices; their staff; their vehicles, and their secretariats to create the structural framework which is already formidable. All it needs is activation. Every city and local government in Nigeria has an office of the NLC.

The Director of Organization of the Labour Party should be able to use the  NLC Training Centers to train and deploy new organizing secretaries and field staff, volunteers, and agents across Nigeria. The infrastructure already exists; it can be effectively, easily and summarily retrofitted. The Labour Party is already experiencing an overload of volunteers. Many such youth volunteers are willing to hit the streets free of charge. Those who are saying that Online traffic does not indicate momentum are wrong because this new campaign technology is hitting every platform. All you need is access to a device, and you are in the zone.

The LabourParty already has an Army of free IT volunteers, who are acting from spot to spot, free of charge for Peter Obi. It is a new campaign, and these old parties, still stuck in their old ways will not know what hit them because they are so disconnected from the new generation, whose medium of organizing is literally, virtual. We can already see how their get-out-the-vote campaign is filling the INEC offices with new surges for PVC registrations, and this is mostly among the youth. Peter Obi speaks their language. It is the language of hope and service. Once you have a cell phone, you are within the orbit of the campaign. That is the magic. Obi is also not campaigning as an “Igbo president.” He is campaigning to be the president of Nigeria, whose stake is connected to Nigeria in a fundamental way. He just happens to be Igbo. Here then is the prospect of Labour: it is offering something new; something exciting; something not connected to the oligarchs with their iron-clad interests, who are prepared to bribe voters in order to secure the power to rape them. Obi chose the moral highway when he left the PDP rather than be part of the muck.