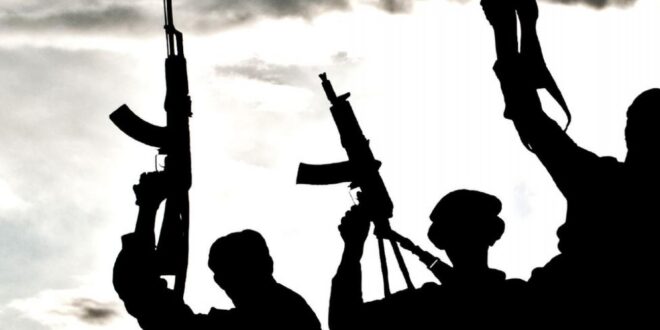 The locals had reported at the Divisional Police Headquarters that some people were using their farms for criminal activities shortly before the attack.

Suspected terrorists have reportedly killed three police officers and five vigilantes when they attacked a community in Ajaokuta, Kogi State.
The locals on Saturday had reported at the Divisional Police Headquarters that some people were using their farms for criminal activities shortly before the attack.
It was learned that the DPO thereafter mobilized his men and some vigilantes with a view to repelling the impending attack.
A source, who pleaded anonymity, said that the terrorists, meanwhile, attacked the policemen and shot the security personnel.
The Kogi State Security Adviser, Commander Jerry Omadara (retd.) also confirmed the killing.
He said the three police officers and five members of local vigilantes were killed in an ambush on Saturday.
According to him, the Divisional Police Officer, acting on an intelligence report that hoodlums had invaded their farms and engaging in illegal activities, mobilized officers in collaboration with men of local vigilantes and headed for the area.
“They were, however, ambushed and in the process, eight of them were killed including three police officers and five members of the local vigilantes,” he said.
Omadara, however, said that the state government would not rest until the culprits were brought to book.
Despite the recurrent insecurity in the state, the security adviser boasted that the state government was capable of giving adequate protection to the residents of the state.