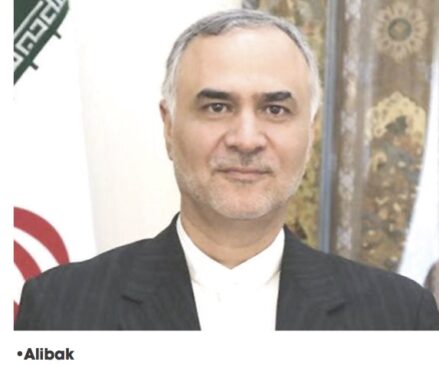 The Ambassador of the Islamic Republic of Iran to Nigeria, Mohammed Alibak, has said if it were not for Iran’s actions in the fight against Islamic State in Iraq and Syria (ISIS) in Syria and Iraq, the Middle East region would now be witnessing a dire situation.

In this interview, Alibak says Iran is ready to share its experiences of battling terrorism with friendly countries, particularly Nigeria. Alibak who also dwelt on Iran’s achievements in the area of power generation stated that Nigeria, like Iran, has high reserves of fossil fuels, and has the potential for extensive electricity generation.

He, however, said that Nigeria’s problem is the lack of technical knowledge in the establishment, maintenance and management of thermal power plants. Alibak concluded that many Iranian companies have high knowledge, expertise and experience in the field of electricity generation and can play an effective role in resolving the electricity crisis in Nigeria.

Many Nigerians travel to Iran for medical treatment. How have you been facilitating this?

The Islamic Republic of Iran, due to its scientific and medical advances, is considered a centre of health tourism in the Middle East and the Persian Gulf countries.

Accordingly, the general policy of the country is based on facilitating the entry of people interested in receiving medical services. This embassy also implements these policies. Applicants for medical services and even other tourists can visit the embassy to receive their visas in less than a week and travel. The embassy has also introduced some people to medical centres located in Iran.

What is the state of the Iran-Nigeria relationship?

Tehran-Abuja political relations have taken a positive and constructive path in recent years. Examples include the Foreign Ministry meeting on the sidelines of the United Nations General Assembly in New York, the visit of the Special Envoy of the Nigerian President to Tehran to attend the inauguration of the new President of Iran, the continuation of consultations between the two countries’ political officials at the executive level. Visas have been issued between the two countries.

What is the volume of trade between Iran and Nigeria, compared to the COVID-19 period?

Nigeria is Iran’s third-largest trading partner in Africa, but given the friendly relations between Tehran and Abuja and the two countries’ abundant potential, the level of bilateral trade relations is not favourable. The value of bilateral trade has increased from $5 million in 2019 to $18 million in 2020 and to more than $130 million in 2021. However, experts believe that, despite a 26-fold increase, the level of trade between Tehran and Abuja is still unsatisfactory and could be much higher. Transportation and distance are the most important obstacles to Iran’s trade with African countries, including Nigeria.

What efforts are both countries making to deepen trade relations?

The sixth joint commission of the two countries recommenced after an eight-year break. In the last round of the joint commission, several documents have been signed-in various economic fields such as agriculture, tourism, oil, technical cooperation, etcetera. On the other hand, both countries seek to identify each other’s trade capacities, and in this regard, dozens of Iranian companies in various fields have been introduced to the Nigerian parties, and delegations from the private and public sectors of the two countries have travelled to negotiate. They have been particularly, commercially comfortable.

How about plans by both countries to establish a direct shipping route from Iran to Nigeria and also plans by Mahan Airlines to establish direct flights from Tehran to Lagos?

Shipping and airline launch issues are among the prerequisites for expanding trade relations between the two countries. Therefore, the two countries have put these issues on the agenda of their bilateral talks. In the last round of the Joint Commission, the Aviation Cooperation Agreement was consulted by the Nigerian Ministry of Aviation and the National Aviation Organisation of Iran. This agreement has been initiated and will be finalised in the future. Also in the near future, a direct airline will be launched between Tehran and Lagos, which will provide direct communication between the two countries.

How can Iran assist Nigeria to halt the menace of insecurity, particularly terrorism, banditry and kidnapping?

The Islamic Republic of Iran has faced terrorist threats and attacks since its inception and has been able to gain good experience in combating these issues. But the most important experience is our fight against the ISIS terrorist groups that formed in Syria and Iraq.

These groups were able to occupy large areas of Syria and Iraq very quickly, and the world witnessed the inhumane acts of these groups. We can say with certainty that, if it were not for Iran’s actions in the fight against these groups in Syria and Iraq, we would now be witnessing a dire situation in the region.

Now, Iran is ready to share these experiences with other friendly countries. We have had meetings with Nigerian security officials in this regard and announced that we are ready to share our experiences in the fight against terrorism.

In the field of equipment and facilities, we also have equipment such as drones, telecommunication and surveillance systems, and we are ready to provide these matters to the relevant institutions in the field of security.

Iran has done very well in the area of power generation, with Iranians enjoying a constant power supply. How did Iran achieve this and how can Nigeria attain the same feat?

Nigeria, like Iran, has high reserves of fossil fuels, and, therefore, has the potential for extensive electricity generation. Nigeria’s problem today is the lack of technical knowledge in the establishment, maintenance and management of thermal power plants. Many Iranian companies have high knowledge, expertise and experience in this field and can play an effective role in resolving the electricity crisis in Nigeria.

Iran’s automobile industry is the largest industry in Iran after the oil industry. All domestic needs of Iran, including light and heavy vehicles, taxis, buses, trucks, motorcycles, etcetera, are all produced in different Iranian companies. In recent decades, Iran has exported thousands of cars to its neighbours. Iran has always welcomed the export of cars or the construction of car assembly lines in other countries. Iran currently has an active auto assembly plant in the West African region. The factory is located in the Republic of Senegal.

Nigeria, as the largest economy on the African continent, as well as the most populous country on the African continent, it is a large market, and naturally, Iranian companies welcome this expanding market. Iran is ready to export its domestic products as well as to build car assembly lines in the Federal Republic of Nigeria. On the other hand, Iranian knowledge-based companies welcome the export of technology to this country.