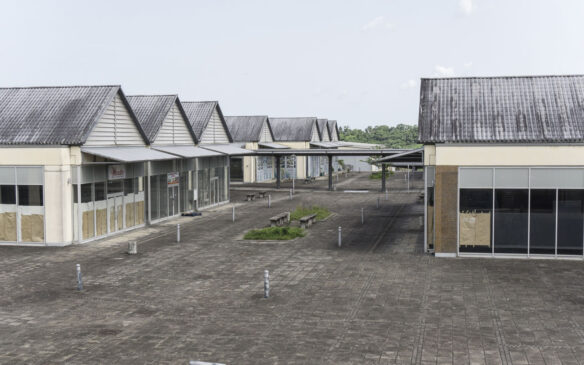 Stakeholders in the free trade zone in Nigeria have attributed the death of the $450 million  Tinapa Resort in Cross River State to the government’s inconsistent policies and lack of infrastructure.

Recall that Tinapa Resort which was hitherto the hub of entertainment and tourism with its futuristic film studios, luxury shops and elevated light railway therein,  has today become an example of monumental waste.

This is just as the Federal Airports Authority of Nigeria(FAAN) said it has suspended with immediate the issuance of licenses to applicants in the free trade zones at the nation’s airports until the conflicts in the regulatory framework between it and the Nigeria Export Processing Zones Authority (NEPZA) are resolved.

The stakeholders spoke today at the ongoing 1st edition of the Federal Airports Authority of Nigeria (FAAN) National Aviation Conferences (FNAC) with the theme, ‘Advancing the Frontiers of Possibilities for Safe, Secure and Profitable Air Transport,’ in Abuja.

They lamented the sorry state of Tinapa, which according to them would have enhanced Foreign Direct Investments (FDIs) into the country if the government had been consistent with its policies on the resort.

Speaking on the topic: ‘Special Economic Zones at the Airports and Trade Facilitation: Growing Revenue and the National GDP,’ they called for policy harmonization by government agencies to ensure smooth growth.

Speaking, the General Manager, Vicven Integrated Services and one of the panelists, Mr. Obinna Emeazo, lamented the massive decay in Tinapa, which he attributed to government policy somersaults and lack of infrastructure at the resort.

According to him, Tinapa was designed to flourish with the approval of $5,000 worth of goods for local consumers, but it was later brought down to $330 and that discouraged investors from investing in the project.

The change in policy by the government, he said had negatively impacted the country’s GDP, especially in the area of exports.

“Tinapa Resort started well and so many investors were attracted by the benefits, but along the line, it was brought down to $330, which led to the dwindling of the growth of the resort.

“Everyone especially tourists goes to Tinapa for shopping and to enjoy their holidays. So, it is inconsistent on the part of the government. You brought out policies that attracted investors and in mid-way, you change such policies. If they have to focus on the special economic zones, we have to make it right. NEPZA must stand its feet and make it strong. The regulations must be strong.

“If you cannot manufacture, you cannot export. How much are you able to attract? When last did you hear about Tinapa? It is still at the elementary stage and one would have expected that it would have gone beyond that,” Emeazo said.

Speaking further, Emeazo identified multiple regulations between FAAN and NEPZA as one of the major factors slowing down the growth of free trade zones in the country, calling on both agencies to harmonize their policies for the progress of the country.

“NEPZA has to show strong leadership and must be able to show strong collaboration with other agencies. You have the Federal Inland Revenue Service (FIRS), which is tax; there is still an argument on the tax investors enjoy. Some states still come to tell the investors to pay tax. They should be able to bring all the states together.

“In their board of directors, you see all the government agencies like customs, finance ministry, FIRS and others, yet you do not see a strong stakeholder like FAAN. At the level of implementation, FAAN will tell you it is against its own approval,” he said.

On his part, the Managing Director, FAAN, Capt. Rabiu Yadudu said that FAAN has suspended the issuance of new licenses to intending free trade zone applicants at the airport areas.

He informed that presently at the Lagos Airport, there are two free trade zone operators, while additional two companies have also applied.

The FAAN boss said that today all the five international airports in the country have been designated as free trade zones, warning that if not well-regulated, it may be a big challenge for the country in the future.

Yadudu insisted that FAAN and other relevant authorities such as the Nigerian Ports Authority (NPA) should be represented on the board of NEPZA to resolve the challenges in the system.