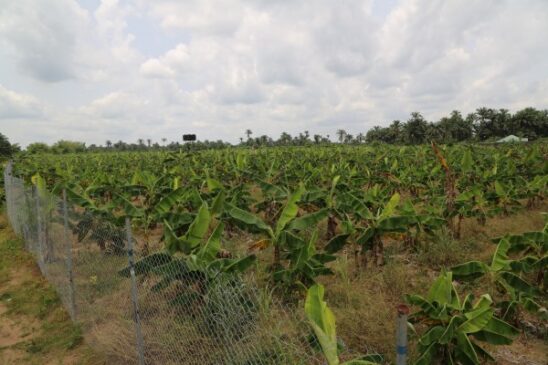 Farmers doing business in the South-East region are crying out over the difficult conditions under which they operate, saying some of them have shut their businesses. “We are running out of business. Our farms are going down.

Everything involved in farming business is on the high side, both in crop production and animal husbandry. We are not getting incentives from the government, and when it ever comes, there is a lot of discrimination. Getting support from banks is very difficult and selective too. Worse still, the little we struggle to put together, Fulani herders lead their cows to ravage them. It is very frustrating and  from all indications, famine is lurking,” they lamented.

A well known cassava farmer in Abia State, Eze Philip Ajomiwe lamented the harsh conditions under which farmers operate in Nigeria, particularly in the South-East region.

Ajomiwe, who is the traditional ruler of the Oriendu Autonomous community in Umuahia North Local Government Area, identified malicious invasion of farmlands by herdsmen as a major problem fuelling imminent famine.

The royal father who owns vast acres of cassava farm, lamented that constant grazing on their farms by cows has made farming in his community not only unrewarding but a risky adventure in recent times.

He noted the grave implications of the destructive activities of herdsmen as well as the soaring cost of production, warning that very soon, the rate of hunger in the country would be unmanageable.

His words:”We are finished. I have large acres of land where I plant cassava but cows have rendered them useless. Even my subjects keep calling me to complain of invasion of their farms by herdsmen.”

These days, we are just planting for cows of Fulani herdsmen. Not only that the cows enter and eat up your crops but the wicked herders sometimes uproot the crops to feed their cows.”

He also lamented the rising cost of production as part of the threat to food security, warning that the situation would get worse unless urgent steps are taken by the government.

Lamenting further, the monarch said: “Diesel is now N700 per litre. I use diesel for my tractors, range, fry drier and generator at the factory, and when you add all the costs, you discover that one kilogram of cassava vita, for instance, is about N1000 but people can’t afford it. So, how can farmers survive?

“Fifty Kg bag of fertilizer that we bought for N7,000 last year now sells for N25,000 to N37,000. You need eight bags for one hectre of land. How much are you going to make out of the produce assuming the cows don’t go in to destroy the crops?”

He blamed government for its docility and failure to decisively deal with the criminal herders willfully inflicting economic pains on farmers.

“Government is the architect of the problem we have today because it encourages the herders by allowing them to get away with their crimes. How can the herdsmen roam with AK-47 and government does nothing? President Muhammadu Buhari should be held accountable because the buck stops at his table.

“There is going to be more scarcity of food because there is no more food in the market.

“I warned the government of impending bread scarcity but they thought it was a joke. Today, Master bakers are on warning strike due to the rising cost of materials.

“The problem of insecurity in our farms must be addressed. People are scared of going to the farm and government must address the challenges.

“Even when we cry to the international community, they tell us that Nigeria is a sovereign country.”

We no longer go to farm — Eha-Amufu people

Also farmers in Eha-Amufu community in Isi-Uzo Local Government Area of Enugu State said they no longer go to their farms for fear of attacks by Fulani herdsmen, saying that the situation portends great danger to them over imminent famine.

Many farm settlements at Mgbuji, Ngele Aguiyi and Abo communities all in Eha-Amufu had come under heavy attacks by marauding herders, resulting in the death of many farmers and the destruction of farms.

A native told South-East Voice that farmers have abandoned their crops due to constant attacks by suspected Fulani herdsmen.

Since these attacks started, soldiers have been accompanying our farmers to the fields but since the soldiers left, they no longer go to their farms,” he said.

Some of the farmers who spoke to South-East Voice regretted that they had huge losses.

In an interview also, another farmer at Umunneochi Council area of Abia State, Mr. Prince Uche said the situation was worse with more imminent danger in the area.

“Our situation is worse because not just that the herdsmen enter into our farms to destroy crops, our people are now scared of going to the farm for fear of being attacked or kidnapped by herdsmen.

“The primary concern of people in Umunneochi now is no longer how to build houses or buy cars but how to feed because our farmlands have been taken over by herdsmen.

“When we plant, herdsmen not only graze on the farms but sometimes wickedly uproot the crops and give to their cows.

“Umunneochi particularly Isuochi, is reputed for cashew production but now, herdsmen have taken over our cashew plantations.

“We want them to leave our land so that we can make good use of what God has given us.”

Prince Muo, an Onitsha-based legal practitioner has sounded serious warning over food insecurity which he said is gradually unfolding across Igbo land as the cumulative consequences of the abuse of agribusiness credit by banks/ bankers.

He cautioned that unless commercial banks change their style and start giving credit support to genuine agribusiness in Igbo land, and stop advising traders at various markets to incorporate agric businesses companies to access agribusiness loans which they use to fund importation of goods and other materials as bags, shoes cosmetics, genuine agribusiness will never be established and flourish in Igbo land.

Prince Muo also said that banks deliberately give agribusiness loans as an overdraft that will be due in 30 days, when in actual sense, it should be for at least three months that it takes a maize farm to mature for harvest, insisting that until they change style and give to agribusiness, the food crisis unfolding across Igbo land, be a reality.

“The commercial banks have never given credit support to genuine agribusiness in Igbo land. The banker advises traders at the various markets to incorporate agribusinesses so that the traders use the agricultural company to access agribusiness loans which are diverted to fund importation of shoes, clothes, bags and cosmetics.”

Sharing his bitter experience with herdsmen, a farmer at Olokoro, Umuahia South LGA, Prince Solomon, said he abandoned his over 13 plots of cassava farm after being frustrated it by herdsmen.

“There was a particular land I abandoned at Unuobia Olokoro. It is about 13 plots. Sometime ago, after planting on the land, herdsmen went in with their cows and destroyed everything. I went back, replanted and used bamboo sticks to fence it round but this time, the herders came again, used their knives to cut the ropes and their cows went in and ate up everything.

“That was how I abandoned everything and farming till today. How can the government claim it has stopped open grazing in Abia but the cows are still grazing everywhere on people’s farms?”

On the way forward, Solomon said he had given up on government, and advocated that individual farmers should devise means of securing their farms.

“I am no longer expecting any solution from government. Government is the one encouraging the herders by not calling them to order.

“Citizens should find a way of protecting and defending themselves against herdsnen invasion. They should acquire more sophisticated weapons to defend themselves against attacks by herdsmen because self-defence is a fundamental human right.

People should no longer sit back to watch herders unleash mayhem on them without any provocation. Enough is enough!

“There is no need to wait for government again because it has failed and will continue to fail. How can you say you have banned open grazing yet cows are grazing everywhere?”

Farmers in Onitsha, Anambra State said that it is very difficult to secure bank loans for agriculture which is affecting their business.

Some of the farmers who spoke to SEV, including Philip Nnadi, the proprietor of Bright Future Cooperatives and Prince Ogbonna of Farm Life, all based in Onitsha, in separate reactions, expressed disgust over the issue of securing loans from banks.

Nnadi said he applied for a loan facility of about N3 million from the Nigerian Incentive Risk based Sharing system for   Agricultural Lending, NISRAL for cow business but nothing tangible came out of it till date.

Nnadi noted that apart from the NISRAL loan, they equally formed a cooperative body and applied for loan from other financial institutions but to no avail, adding that they are suspecting that most financial institutions are not interested in giving loans to farmers, rather, they are focused on big time manufacturers and importers.

A father of four, based in Nwaorieubu, Mbaitoli Local Government Area of Imo State, Mr. Declan Onyewuenyi said he was considering quitting poultry farming owing to his recent unpleasant experience.

Onyewuenyi who said that he has been engaged in poultry business for about eight years, lamented that high cost of birds and commodities needed for the business pushed him into buying a breed of birds that recorded what he described as worst form of stunted growth which made him spend so much in trying to raise the birds to a stage that they could be sold.

“I am thinking of quitting this poultry business. The last breed of birds I bought really dealt with me. I kept feeding them for more than four months, yet they refused to grow. In the end, I couldn’t even realise the money I spent in buying feed.

“The best breed of birds we used to buy which you could sell within two months, is no longer in the market due to the economic situation in the country. The breed is called Agrited. It’s like the company that was selling it has folded.

Farmers in the Akpaa Mbato community, Obingwa Local Government Area, Abia State, have cried out over the destruction of their crops by cows herded by Fulani herdsmen.

They lamented that famine looms in the community if nothing was done to compensate them for the huge losses they have incurred from the destructions.

The Farmers who spoke through the Youth President of the Community, Mr Steve Ugboaja, lamented that the Fulani herdsmen invaded their community with over 500 cows and destroyed cassava, vegetables, and maize, among other crops which they farm in large expanses of land.

He said; “Farmers in Akpaa Mbato are now counting their losses over the destruction of communal farms in the community. Our people usually invest money in farming crops like cassava,vegetables ,maize, and other crops in large expanses of land, but all have been destroyed by Fulani cows. These farmers collected huge sums in loans and now, they are in trouble. Famine looms in the community unless something is done to avert the crisis.”

Ugboaja disclosed that he had reported the matter to the Abia State committee set up to mediate between farmers and herdsmen. Culled.