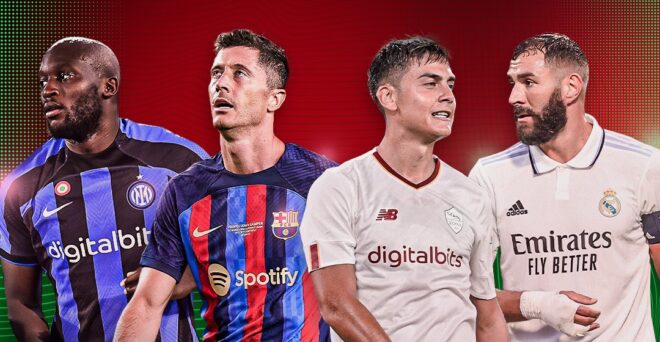 As the new LaLiga and Serie A seasons kick off, Showmax Pro subscribers across the continent will be happy to know they can now stream the games live, courtesy of SuperSport.

LaLiga kicked off this past weekend and will see Real Madrid defend their record 35th title. AC Milan, fresh off winning their first Serie A title in 11 years, will be aiming to win their second consecutive Serie A crown for the first time since 1993.

All the LaLiga action and drama to look forward to

LaLiga will see a lot of focus being placed on a revamped Barcelona side, who have invested heavily by bringing in the likes of Polish striker Robert Lewandowski from Bayern Munich and French defender Jules Kounde from rivals Sevilla among other high-profile names – this despite their much-publicized financial troubles. All the while, manager and club legend Xavi will aim to inspire his troops to dethrone their biggest rivals Real Madrid with his new signings as they compete for the title this season.

Ballon D’Or favorite Karim Benzema will be looking to pick up where he left off after a great individual season where he won the golden boot, the LaLiga title and the UEFA Champions League.

Some high-profile African players will be on show too, headlined by the likes of Ivory Coast’s Franck Kessie (another of Barcelona’s new recruits); Nigerian winger Samuel Chukwueze, who is coming to life for Villarreal; and newly promoted Almeria’s Nigerian goal-machine Umar Sadiq.

In addition to live games, Showmax Pro will play host to an array of magazine shows for fans of LaLiga to stay informed about the latest signings, player developments, match previews and reviews on the following shows:

What to expect from Serie A

In the last Serie A season, AC Milan surprised everyone when they beat city rivals Inter to the Scudetto. The title-winning squad was spearheaded by decorated veterans Olivier Giroud and Zlatan Ibrahimovic (who will turn 41 this season, making him one of the oldest outfield players), and they finished two points clear of Inter on 86 points.

Inter have since beefed up their attack this season with a loan return of proven goalscorer Romelu Lukaku after a tough season in the Premier League with boyhood club Chelsea. He will want to forget last season and once again endear himself to the I Nerazzurri fans by hitting the ground running at the San Siro.

Lukaku is not the only former star returning to Italy: Paul Pogba left Manchester United for Juventus for a then-record 89-million-pound fee, and now he’s making that exact move for the second time in his career. However, fans of The Old Lady will have to wait a while for his second debut, with injury leaving him on the sidelines for the start of the new season.

Don’t miss the footballing action from LaLiga, running from 12 August 2022 to 4 June 2023, and Serie A, getting underway from 13 August and running until 4 June 2023. Stream all this season’s matches live on Showmax Pro, courtesy of SuperSport. Visit www.showmax.com to subscribe to Showmax Pro. Join the conversation on social media by following and interacting on the below pages: Twitter: @ShowmaxPro Instagram: @ShowmaxPro Facebook: @ShowmaxPro