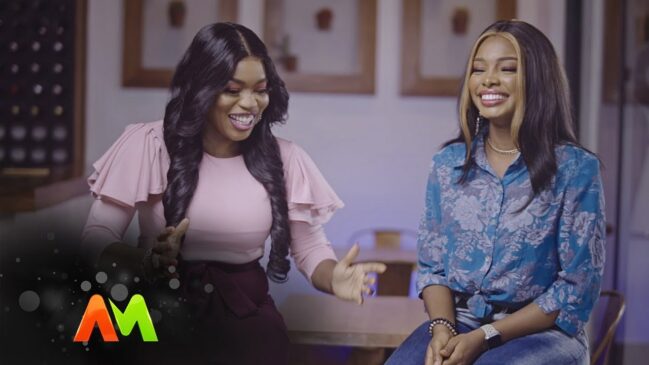 In the sixth episode of Africa Magic’s Shoot Your Shot, we follow David, a young IT professional and tutor. He met his dream girl, Rebecca, at his workplace, where the latter came to learn some programming languages. Shy about approaching her directly, he sought out the Shoot Your Shot team to help him express his feelings and desire to be in a relationship with her.

As usual, Bisola first had a chit-chat with the admirer, David, who revealed that he fell in love with Rebecca’s beauty and charisma and thought it about time to express his feelings after three months of bottling it.

Meeting the black beauty, Rebecca was super excited – albeit nervous – to find out that she had a secret admirer who liked her enough to profess his feelings for her on the show. A computer science student from a family of four, the jovial beauty is a baker and owns Sprinkles and Sweets. Don’t we just love an entrepreneur with a sunny smile?

She also shared that she was single and open to a relationship if she found someone tall, smart, and sweet, to which David ticked all the boxes. He also scored a point for going through the Shoot Your Shot team to approach her.

When meeting her secret admirer on a flower-filled date, David was the last person she expected to see, but our Romeo scored another point when he presented her with a bouquet of red roses.

After getting comfortable and asking about her studies and business, David nervously asked her to be his girlfriend. Sadly, Rebecca didn’t have a positive or definite answer to his question. She expressed that she would like to know him better and be sure about each other’s feelings. Moving forward, they decided to settle for friendship. Hopefully, their friendship will lead to more in the closest future.

Shoot Your Shot is a rollercoaster of emotions, literally. While it was a no on the sixth episode, some yes(es) are coming secret admirers’ way soon. We only have to wait for the next episode. Catch the second episode next Sunday, July 31, on Africa Magic Showcase (DStv channel 151) at 5:30 pm. You can also follow the conversation with the hashtag #AMShootYourShot. Visit https://www.dstv.com/africamagic/en-ng/show/shoot-your-shot for more information.