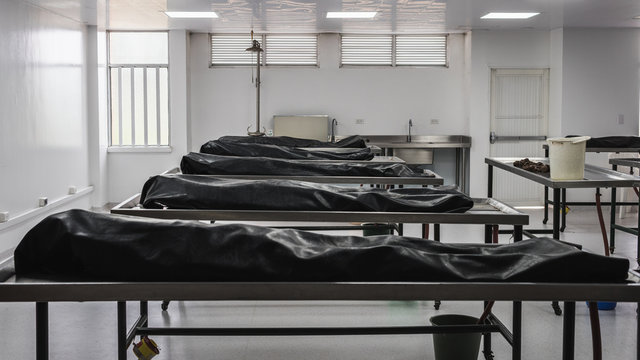 For late Mrs Rita Ugwuegbulam (nee Akpaka), the word rest in peace may be far from actualization, as her body has been lying in a morgue in Anambra state for seven years, without being buried, owing to the claim of a  controversial autopsy report, by her family.

Late Rita, who was an Assistant Manager in a private firm before she got married to  Raymond Ugwuegbulam, died at age 48, on May 22, 2015, in her matrimonial home in Enugu State.

But her family members said their sister died under questionable circumstances owing to the discovery of some incisions on her abdomen.

Consequently, members of the Akpaka family of Umueze, Nimo, in the Njikoka Local Government Area of Anambra State insisted that an autopsy be conducted on her to ascertain the actual cause of death.

But they expressed regrets that the attempt to obtain a post-mortem to ascertain the cause of their sister’s death has been marred by an endless chain of intrigues.

An autopsy was conducted on October 16, 2015, by Police Pathologist, Dr S. A. R. Ohayi of the Enugu State University Teaching Hospital. But the bereaved family alleged that the report failed to state the cause of death. Rather they said it made a suspicious conclusion as to whether the fallopian tube and the ovaries were intact.

Subsequent post-mortem imaging carried out by another Pathologist at the Federal Medical Centre, Asaba,  Delta state, further aroused the family’s suspicion, as it alleged that it produced two conflicting reports: one not bearing a signature and affirming that the fallopian tube and ovaries were visualized and the other bearing a signature and affirming that these organs were not seen.

However, the petition dated  December 8, 2015, and signed by the family’s counsel, D. C. Ononiba, of Igu, Obuka & Associates, according to the family,  was struck out by the Panel.

Lamenting futile efforts to get justice for their sister, spokesman for the bereaved family, Chris Akpaka,  said, “ “When MDCN struck out our petition for trumped up and frivolous reasons, we petitioned the higher authorities viz: the President, the National Assembly, the Secretary to the Government of the Federation, the National Human Rights Commission, the Ministry of Health, the Ministry of Justice, the ICPC, and the IG of Police”.

”In 2019, we found out through informal channels that the Ministry of Health, after we filed a complaint for missing petition, assigned the case to a committee who in turn sought the recommendations of their legal department. We succeeded in tracing the case file to the legal department. The file has the reference number: TER/DM/DHS/004 and was dated June 7, 2018. I was able to talk to the lawyer assigned to give the recommendations, he “told me the file was awaiting a recommendation requested by a committee.

But soon after, this lawyer left the ministry. We still don’t know what happened to the recommendations or the committee. These are part of the questions that need to be asked,” Chris Akpaka stated.

He further explained that in June 2022, his family made another effort to trace the file to the legal department of the Ministry of Health but alleged that they were forced to abandon the search due to hostility by one of the staff.

Akpaka also accused the National Human Rights Commission of closing their case without his family’s knowledge. He said, “The lawyer whom the case was assigned to said they wrote us twice to warn that they would close the case and when the case was closed.  But we didn’t receive any of it.

“ We repeatedly requested copies of the said letters, but they didn’t give them to us till this date. They later told us they have referred our case to their Enugu office which we found very suspicious because our main defendant is MDCN which is there with them in Abuja. We see that move as a ploy to kill the case.” Crime Guard gathered that it was at the National Assembly that the family got what seemed then like some ray of hope for justice, as the petition was treated at the hearings of the House of Representatives Public Petition Committee, consequent upon which a resolution was passed on the floor of the House.

A document marked ‘Ref: NASS/CAN/105/Vol.25/484 dated September 11, 2019, communicated the resolution to the MDCN. The document  signed by the Clerk of the National Assembly, M. A. Sani-Omolori,  “The House of Representatives on Thursday 39 May 2019 debated on the above subject matter (petition by the Akpaka family) and consequently resolved that the House should refer this matter to the Medical and Dental Practitioners Board for further investigation to determine the issue.” The endorsement on the letter shows that it was received by the MDCN on September 17 2019.

In spite of the House of Rep’s directive, the family said,  ”The MDCN seemed to have ignored the resolution, we need to find out if the National Assembly has done anything to compel them to act as directed,” said Chris Akpaka.

It has been two weeks since Crime Guard contacted authorities indicted by the aggrieved family, to get their reactions. They included offices of the Secretary to the Government of the Federation,  SGF Speaker of the House of Representatives, the Ministry of Health, the Ministry of Justice and the Presidency.

Others were the duo of the Chairman and the Registrar of the MDCN seeking an update on the further investigation as directed by the National Assembly.

Only the offices of the SGF and the Ministry of Health acknowledged receipt of the enquiry a week later. An email from the SGF stated,” your request will be submitted for necessary action.” Nothing.

On the part of the Ministry of Health, a call was received from Dr Ogbonna N. Aruma who introduced himself as a Consultant Obstetrician and Gynecologist.

He acknowledged receipt of the enquiry to the Minister but complained that some of the documents referenced in the enquiry letter were not attached.  He claimed that he was still new in the Ministry and that the issue in question was completely foreign to him, even as he insisted that no one was trying to cover up any wrong done by anybody.

The endless wait for justice

Lamenting the endless wait for justice for seven years and the consequent delay of his sister’s corpse in the morgue for seven, Chris Akpaka, said, we believe we are victims of conspiracy and corruption. We are being double-crossed at every step of the way. We want to bring our ordeal to the public domain.

We’re trying to get those higher authorities to take action against the parties involved. We are appealing to those in higher authority to do their job by investigating and concluding their investigation as soon as possible”.