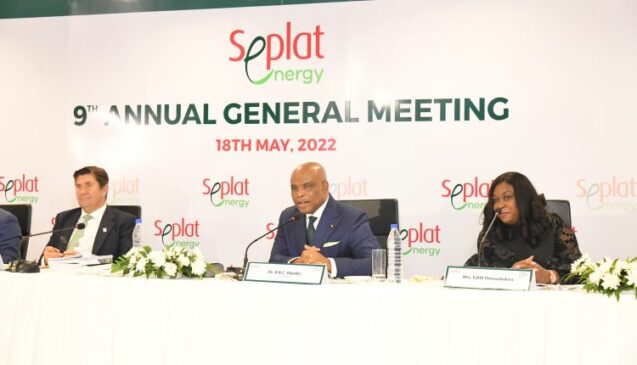 SEPLAT Energy Plc has approved a final dividend of $0.10 per share to shareholders.

This was disclosed at the company’s 9th Annual General Meeting held in Lagos.

The financial year report showed an increase in profit before tax of 197.8 percent to N34.7billion, from N10.6billion year-on-year.

The company also generated cash from its operations to the tune of N74.4 billion, from N1.7billion year on year, rising by 197.8 percent.

The training is aimed at building the capacity of young people in handling pre-hospital emergencies.

A statement made available noted that the initiative was geared towards youth empowerment and social impact.

The statement partly read, “This initiative underscores the company’s social impact objective of making a difference through youth empowerment.

“This initiative became imperative with the growing anxiety about the high incidence of cardiovascular diseases such as heart attack, cardiac arrest, and the attendant fatalities among Nigerians in recent years.

“Similarly, the menace of Road Traffic Accidents and other traumatic injuries is mind-boggling. To substantiate this problem, the World Health Organization recently reported that RTA is the biggest killer of young people, especially in Nigeria and third world countries.”

Speaking at the inauguration ceremony of the initiative, the Director, External Affairs and Sustainability, Seplat Energy Plc, Dr. Chioma Nwachukwu, stated that Seplat is committed to empowering the youths and touching lives, which explains why it keyed into the lifesaving initiative.

She said, “CPR and First Aid skills are needed by all and critical to saving lives during prehospital emergencies.”

Also speaking at the event, the representative of the Commissioner for Education, Lagos State, Mr. Ashaola Femi, applauded Seplat Energy Plc for the huge investment in young talents.

He acknowledged that the scheme could create systemic change from the current negative culture of taking pictures and videos at the scene of emergencies instead of assisting the victims.

He noted that it was this noble objective that informed the approval of the program by the Ministry of Education for HEI to train all senior secondary school students in Lagos earlier in the year.

In his speech, the Executive Director of Health Emergency Initiative, Paschal Achunine, expressed profound gratitude to Seplat Energy Plc for the huge support. He praised the company for its commitment to the sustainability of its operating environment, bearing in mind that any investment in young people would translate to business continuity.