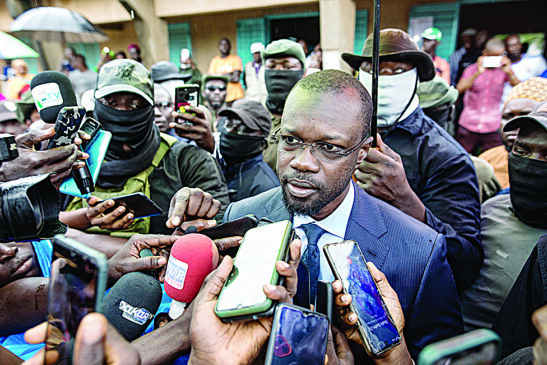 Senegal’s ruling coalition says it has won 30 of 46 departments in Sunday’s legislative election, giving it a majority over the opposition.

“We won 30 departments” out of the 46 in the west African country and overseas constituencies, Aminata Toure, head of the presidential coalition, told reporters late Sunday.

“This undoubtedly gives us a majority in the National Assembly.”

“Of the 46 departments in Senegal, we won 30 departments. So we gave a large majority to our president,” said Touré.

The head of President Macky Sall’s coalition, Benno Bokk Yaakar, stressed that the information is “precise, accurate, fair and not invented” with wins in Senegal’s North, West and Central areas.

“We congratulate all the citizens who voted for us,” said Yaakar.

“We have given a majority in the National Assembly to our coalition president,” Sall, she added, without giving the number of seats won by her camp or whether it was an absolute or relative majority.

Toure however acknowledged her coalition had been defeated in the capital, Dakar.

The mayor of Dakar, Barthelemy Dias, denounced the results, claiming that “the opposition won the elections” and calling on the youth to mobilize to “preserve their victory.”

Official provisional election results are expected later this week. The Autonomous National Electoral Commission, the body responsible for monitoring and supervising the elections, declared that the ballot took place in peace and calm.

It also failed to specify the number of seats or what kind of majority it was claiming.

“We call on national and international opinion to act as witnesses against any attempt to manipulate the results,” the opposition said in a statement.

The opposition had hoped the elections would impose a cohabitation, or divided government, on Sall and curb any ambitions he may have for a third term.

Sunday’s polls were an important test for Sall after local elections in March saw the opposition win in major cities, including Dakar, Ziguinchor in the south and Thies in the west.

Initial indications were that the poll was close and that the main opposition coalition gained ground, particularly in urban areas, according to local media.

About 6.8 million voters were expected at the polls to elect 165 deputies to the National Assembly. The opposition has focused its campaign on the need to vote against the ruling coalition to prevent Sall from trying to secure a third term in the 2024 presidential elections.

Senegal’s political atmosphere is tense. Violent protests broke out last year after Sall’s main opponent, Ousmane Sonko, was arrested on rape charges and more than a dozen people were killed. Sonko, who came in third in the 2019 election, denies the allegations and his supporters have been vocal about their opposition to the president.

This year, Sonko and another of Sall’s prominent opponents were disqualified as candidates, sparking more widespread anger and protests in which three people died in June.

Senegal, with a population of 17 million, is known for its stability in West Africa where there have been coups in three countries since 2020 and where leaders have changed laws in order to remain in power for third terms.

Anger has grown in the region amid economic worries as prices for fuel and food have skyrocketed due to the war in Ukraine.

The single round of voting will decide the 165 seats of the single-chamber parliament — currently controlled by the president’s supporters — for the next five years.

Sall has promised to appoint a prime minister — a position he abolished and then restored in December 2021 — from the winning camp.

Some seven million Senegalese were eligible to vote in the election, which passed without any major incidents.

Turnout at several polling stations appeared relatively low, according to correspondents and observers, and the interior ministry said the participation rate was 47 percent.

Provisional overall results are expected no later than Friday, but local media and the main political parties have been counting some of the results since Sunday evening.

“I hope… there are no disputes,” said Lamine Sylva, a 60-year-old artist who voted at a school in Mbao, near Dakar.

“It’s like football — there is a winner and a loser.”

Yahya Sall, a retired soldier, said he hoped the new parliament “will have a strong opposition presence… to advance democracy”.

Lawmakers are elected according to a system that combines proportional representation, with national lists for 53 lawmakers, and majority voting in the country’s departments for 97 others.

The diaspora elects the remaining 15 members of parliament.

This year, eight coalitions are in the running, including Yewwi Askan Wi (“Liberate the People” in Wolof), the main opposition coalition headed by former presidential candidate Ousmane Sonko, who came third in the 2019 presidential election.

Ahead of the poll, Yewwi Askan Wi joined forces with Wallu Senegal (“Save Senegal”), led by former president Abdoulaye Wade.

The two groups agreed to work together to obtain a parliamentary majority and “force governmental cohabitation”.

The vote took place against a backdrop of rising prices, partly because of the Ukraine war.

The opposition has questioned the priorities of the government, which has highlighted its subsidies for oil products and food as well as infrastructure building.

“Is the priority of the Senegalese to build beautiful stadiums, and new highways while people are not eating?” Sonko said after casting his ballot in Ziguinchor.

He has remained vague on the subject, but any defeat of his supporters in Sunday’s vote could upset such plans.

The 21-day election campaign passed in a mostly calm atmosphere.

The pre-campaign period, however, was marked by violent demonstrations that left at least three people dead after several members of the main opposition coalition, including Sonko, were banned from taking part.

On June 29, the opposition eased tensions by agreeing to take part in the elections, which it had threatened to boycott.