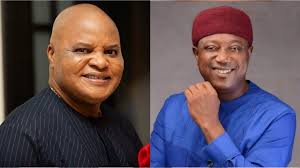 A fresh crisis is brewing in the All Progressives Congress (APC) following a controversy over parties’ candidates for the October 31 elections for Imo North and Cross River North Senatorial Districts respectively.

The primary election team sent to Imo State conducted the exercise in Okigwe, headquarters of the Senatorial District, but two separate results were announced by members of the committee.

Chairman and Secretary of the seven-member team sent to Imo, Senator Surajudeen Bashiru, and Chief Samuel Ogbuku respectively and two other members, Senator Jibrin Gada and Bello Kumo announced Frank Ibezim as the winner of the contest.

However, three other members of the team, Alhaji Umar Gana, Mohammed Saba, and Godfrey Ejim, who submitted a separate report, announced Senator Ifeanyi Ararume as the winner of the same contest.

Bashiru, in an interview with reporters soon after submitting his report to the party, said “I am the Chairman of the APC Election Committee for Imo North Senatorial District. I have with me Honourable Kumo, a ranking member of the House of Representatives.

“Some of those who presented the report are Chief Samuel Oguku, the Secretary, and Senator Gada. Four of us submitted our report.

“Although we have a seven-man committee, since Thursday afternoon, I’ve not set my eyes on three of the members and as you know, the rule of the committee is based on a simple majority.”

“At the end of the day, the aspirant that got the highest votes is Frank Ibezim and he is the person declared as the winner in my capacity as the chairman of the election committee and his name was submitted to the organizing secretary of our party a moment ago,” he added.

READ  Hate Speech Bill Is One Of The Craziest Ideas, Is Dead… Bishop Oyedepo

Bashiru said copies of the result sheets were also given to the representatives of the police and the Independent National Electoral Commission, who witnessed the exercise.

About five minutes after Bashiru and his team left, the three other members, led by Umar Gana, arrived at the secretariat and went to the office of the National Organising Secretary. After they returned, Gana briefed the media.

He said, “After the exercise, Senator Godwin Ifeanyi Ararume emerged as the winner of the primary election.

“Saying anything short of this is not acceptable because we went to the field. Other people will claim we have done this or done that, but in life, for whatever you do, there is judgment.”

Gana alleged that the chairman and the three other panel members “disappeared” when they were due to honor an appointment with the Imo State Governor, Hope Uzodinma.

A similar scenario played out in Cross River State after the conduct of the election for the Cross River North Senatorial District. Two separate winners were also announced.

A result announced by the APC Senatorial Returning Officer Mr. Lazarus Undie, in Calabar, declared the outgoing Vice-Chancellor of the University of Calabar, Prof Zana Akpagu, as the winner.

Meanwhile, the chairman of the APC primary election committee for the state, Alhaji Suleiman Nakowa, declared Agi as the winner of the primary.

During his announcement in Abuja, late on Friday, Nakowa declared that Agi had 113, 229 votes to defeat Prof Akpagu, who was said to have got 8,635 votes.

When contacted, Deputy National Publicity Secretary of the APC, Yekini Nabena, said, “The party set up committees to conduct the primary in each of the affected states. These committees have chairmen and secretaries; we will receive and consider their reports. We cannot return to the past; we will follow our laid down rules and regulations.” – Punch.