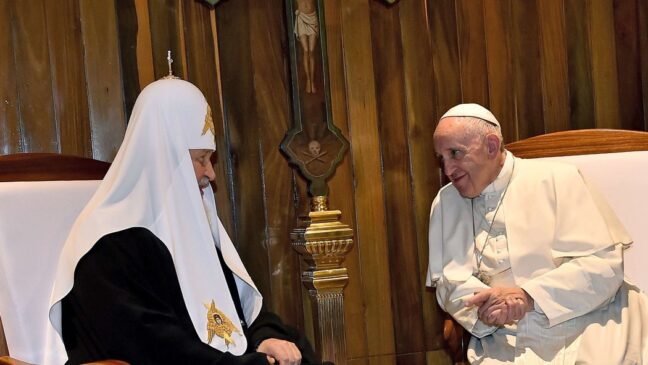 Russia’s Orthodox Church on Wednesday criticized Pope Francis for the Roman Catholic leader’s comments to a newspaper in which he told the leader of the Orthodox Church not to be “Putin’s altar boy.”

Patriarch Kirill, the head of the Russian Orthodox Church, said Pope Francis did not accurately share the details of a Zoom call in March between the two leaders, accusing the pope of lying about the altar boy comments.

“Such statements are unlikely to contribute to the establishment of a constructive dialogue between the Roman Catholic and Russian Orthodox Churches, which is especially needed at this present time,” Kirill said through the church’s communication wing.

Pope Francis on Tuesday told the Italian newspaper Corriere Della Sera that when he spoke with Kirill, the Russian bishop read a 20-minute statement from prepared notes that justified Russia’s invasion of Ukraine.

Francis, who has called the killing of Ukrainian children “barbarism” and has repeatedly called for an end to the war, then told Kirill he cannot turn into Russian President Vladimir Putin’s “altar boy.”

“I listened and told him: I don’t understand anything about this,” Francis told Corriere Della Sera. “Brother, we are not clerics of state, we cannot use the language of politics, but that of Jesus. We are shepherds of the same holy people of God. For this we must seek ways of peace, to put an end to the firing of weapons.”

In Wednesday’s statement, the Russian Orthodox Church said Kirill notified the pope about Russia’s justification for the war, citing talking points that Putin has used about neo-Nazis in Ukraine and NATO expansion.

Kirill added that “this situation is associated with great pain for me” and asked the pope, “How can we contribute to the pacification of the warring with a single goal: to achieve the strengthening of peace and justice?”

According to the Russian church, the leaders agreed to move forward with the ultimate goal of achieving peace.

Pope Francis, meanwhile, has frequently tweeted about Russian attacks in Ukraine, including the bombing of the port city Mariupol. On Sunday, he said the city had been “barbarically bombed and destroyed.”