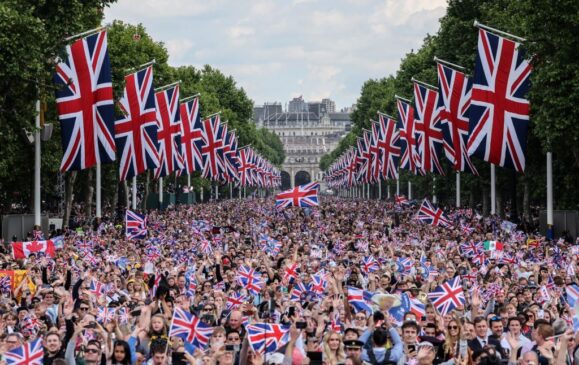 The Queen’s Platinum Jubilee, which marked her 70th anniversary as monarch, took place last weekend. The milestone was marked with celebratory events across London. I attended many of the events and found that the reality was not how it appears on social media.

I was in the city from Wednesday, June 1 until Sunday, June 5 to cover the Jubilee for Insider. While the trip was amazing, I saw another perspective that wasn’t shown on social media or on TV.

The first event I attended was the Trooping the Colour parade on June 2. The parade of royal horses, soldiers, and musicians took place on the Buckingham Palace Mall and was followed by an appearance by the royals on the palace balcony.

The parade was open to the public. Buckingham Palace Road was understandably busy and the roads were cordoned off as people made their way to the palace.

I finally arrived at the parade route on The Mall, a street that begins at Buckingham Palace and ends at Trafalgar Square.

Some people brought stools to help them see over the massive crowds, and I wish I had thought of the idea myself.

Others brought chairs to keep comfortable during their hours-long wait.

When the parade began at 10 a.m., some people didn’t attempt to see over the crowds and instead opted to sunbathe on the nearby grass.

I found a spot at the end of the parade route, and I had a pretty clear view at first.

When the royals showed up in carriages, however, it was extremely difficult to see over all the camera phones in the sky.

When the parade ended, the barricades on The Mall were removed and everyone was invited to Buckingham Palace to watch a flyover.

The royal family watched from the balcony. My view of them was partly obstructed since a stage was being built for the Platinum Party concert, due to take place later that weekend.

I felt sorry for tourists who might have been seeing the palace for the very first time that day, as it was so busy that you couldn’t even take a picture without being photo bombed.

Later that evening, there was a beacon lighting ceremony at Buckingham Palace.

The palace was cordoned off and manned by security guards since the event wasn’t open to the public.

The palace was off-limits for most of the weekend. On several occasions when I tried to stop and take a photo, I was urged to “keep moving” by security.

On June 3, images of the Queen were projected onto the palace. While this was a spectacular sight, the palace was still partly cordoned off and you could only walk so far down The Mall before being stopped by security.

On June 4, the BBC Platinum Party at the Palace took place. The concert at Buckingham Palace saw performers such as Alicia Keys and Queen and Adam Lambert take the stage.

The concert was open to those who had won tickets in a public ballot. For non-ticket holders, a small screening took place at the nearby St. James’s Park.

There was also the option to watch from The Mall. While the atmosphere was electric, it was impossible to see.

The surrounding area was overcrowded with royal fans, security guards, and large groups of police officers on duty.

And it wasn’t just the palace that was busy during the Jubilee weekend. The entire city was overcrowded.

There were large lines at the underground stations.

This was particularly the case in central London after major royal events, such as Piccadilly Circus station after the Platinum Party. I felt bad for Londoners who worked in the area trying to make their way home.

The two things I was guaranteed to see each day were crowds of people and Union Jack flags.

Overall, the Jubilee weekend was spectacular — but it also taught me that you shouldn’t always trust what you see on TV screens or on social media.