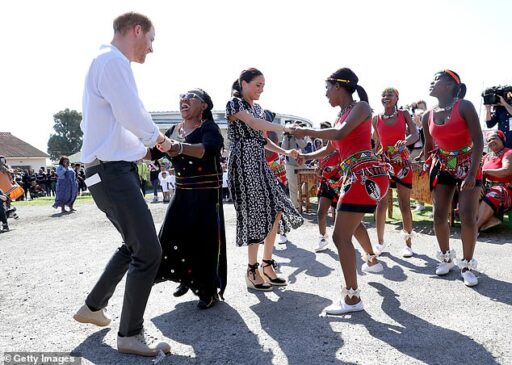 The Monarch understood the Sussexes’ desire to lead a normal life as she had experienced something similar during her stay in Malta between 1949 and 1951.
She was able to enjoy some privacy on the island while Prince Philip was stationed there as a naval officer.
The documentary The Royal House of Windsor reveals why the Monarch enjoyed her time in Malta.

The Queen had already made Harry the president, with Geidt the chairman of trustees the trust existing to champion ‘young leaders around the world who are driving positive social change’.

The idea was for Meghan to do special work ‘supporting women and girls’. This was all part of a new strategy to integrate the young Duchess more fully into royal life — ‘Lord Geidt will be Her Majesty’s eyes and ears,’ explained a courtier.

Geidt and the Queen sat down to frame a plan with Sir David Manning, a respected and well-liked former diplomat — ambassador to the United States from 2003-7 and since 2009 a part-time adviser to the joint household of William and Harry.

The big idea was to get Harry and Meghan out of the country for a decent spell. It would give everyone a breather.

The Queen wanted to offer both honour and responsibility to the couple by handing them some role in her beloved British Commonwealth of Nations — a highly personal token of trust.

And by handing the recently ennobled Duke and Duchess a semi-regal role visiting and being honored ceremonially around the Commonwealth, the plan also surely offered the best route yet devised to give a British ‘spare’ self-sufficient status that truly matched, but did not threaten, that of the heir.

The Queen added personal touch. She had heard and read much of Harry and Meghan’s wish to live an ‘ordinary’ existence.

Well, she could recall such a period in her own life — her ‘Malta Moments’ between 1949 and 1951, when Philip was serving as a naval officer on the Mediterranean island and she would fly out to stay with him.