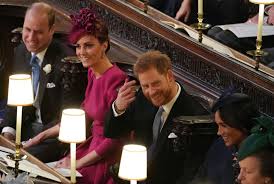 At the time, the Duke and Duchess of Sussex had just found out they were expecting their first child, Archie Harrison Mountbatten-Windsor. So, they shared the exciting news with family members at the wedding, and (to no surprise) the bride was less than thrilled.

“It did not go down particularly well with Eugenie, who, a source said, told friends she felt the couple should have waited to share the news,” the book reads.

Still, Prince Harry and Princess Eugenie are known for their close-knit relationship, so we’re fairly confident that they’ve already moved on from the snafu.

“Eugenie had always been more than just a cousin to Harry. They were also the closest of friends,” says an excerpt from Finding Freedom. “Out of all the queen’s grandchildren, Harry and Eugenie have one of the most natural connections.”

Always an important reminder: No one outshines the bride…not even a royal baby.