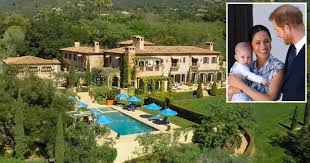 Since deciding to step back as working royals, Prince Harry and Meghan have been living in mansions belonging to other people—first on Canada’s Vancouver Island and then in Tyler Perry’s L.A. home. But now the couple has taken an important step in their lives together and bought their own family home which they have moved into with baby Archie.

A spokesman for the Sussexes confirmed to T&C that Harry and Meghan have purchased a property in California’s Santa Barbara, moving early last month. “The Duke and Duchess of Sussex moved into their family home in July of this year,” the spokesman said. “They have settled into the quiet privacy of their community since their arrival and hope that this will be respected for their neighbors as well as for them as a family.”

A source told Page Six that the move has been a “very special” time for the family, adding: “They have thought about this carefully and researched it well. This is the place where they plan to be happy, make good friends, and bring up Archie, giving him the chance to play with other children his age.”

Last month the couple’s lawyers filed a complaint about an invasion of privacy against unnamed defendants with California’s Superior Court over what their lawyers described as “serial intrusions” on Archie’s privacy. The documents alleged there have been “relentless and quite frankly shocking efforts of the tabloid media to profit from serial intrusions on the privacy of a 14-month-old child in his own home.” While the legal action relates to their time at Tyler Perry’s property, it sets a clear precedent that the couple won’t hesitate to use the courts to ensure privacy in their home life.

Since stepping down as working royals at the end of March, Harry and Meghan have continued to regularly appear publicly in support of charities and organizations they care about. “The Plaintiffs simply want to continue the public impact work that is so important to them, while also having the private life to which any young family or individual has the right,” the lawsuit reads.