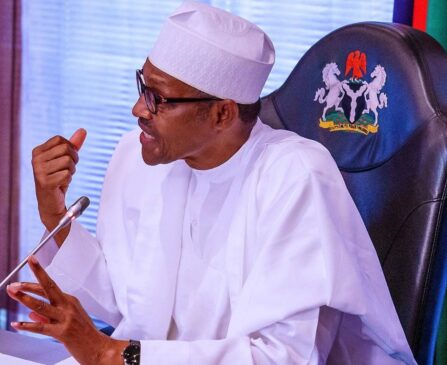 Nigeria‘s President Muhammadu Buhari has vowed there will be “no mercy” for gunmen who killed more than 150 people in a series of weekend attacks in the country’s north. In some of the worst violence Nigeria has seen this year, armed gunmen on motorcycles raided and razed a group of villages in the northern Plateau state, highlighting growing insecurity in the region.

Villagers have been scouring bushes and another terrain for missing loved ones since the Sunday attacks. Many locals were shot trying to flee from the gunmen. Residents have said women and children were abducted by the attackers, but the number of those abducted remained unclear.

More than 80 victims were buried earlier this week in mass funeral services in the four villages, as additional security forces arrived in the area.

In a statement issued by his spokesman, President Buhari urged residents to “expose the perpetrators of such incidents, their sponsors and those who encourage such criminals who carry out these dastardly acts of murder, so that the law will take its course.”

A burnt house is seen in Kukawa village, in the Kanam Local Government Area of Nigeria’s northern Plateau state, on April 12, 2022, after an attack by bandits.

Eyewitnesses said more than 100 houses were set alight, as well as a cell phone tower. Telephone service was already unreliable in the remote region, making it difficult for residents to call the police for help, but also for news of the attacks to get out.

Analysts say criminal gangs, known in Nigeria as bandits, from the bordering northwest Kaduna state have become more brazen in recent years. The region has seen clashes between local farmers and herders over access to water and land for years, which evolved into criminal gangs that carry out revenge killings.

On March 28, bandits targeted a train traveling from Abuja to Kaduna state, blowing up the tracks, killing eight people and kidnapping dozens more. Several videos of the hostages have been released, showing them in a forest surrounded by armed men, pleading to the camera for the government to help.

More than a dozen soldiers were killed last week by gunmen who attacked an army base in Kaduna state.

Nigerian security forces say they’re stretched too thin as they battle a 12-year jihadist insurgency by the Boko Haram extremist group and the regional ISIS affiliate in the northeast of the country. That conflict has driven more than 2 million people from their homes and left more than 40,000 dead since 2009.

The Northern Elders Forum, a council of local leaders, issued a statement on Tuesday calling on Buhari to resign immediately, arguing that he’s failed to deal with killings, kidnappings, and general insecurity in the country during his seven years in office.