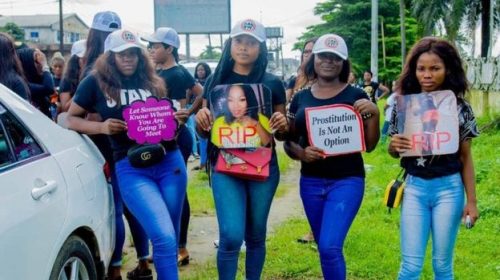 At least, eight young women have been murdered in different hotels within the last two months.

Hundreds of women marched to the Government House in Port Harcourt, protesting the killing of young women in hotels in Rivers State.

The women, who were clad in black attire, called for an end to the ugly trend. They also stated that everybody, including prostitutes, deserve the right to life and should not be killed in such a gruesome manner.

Personnel of the Rivers State Police Command, rescued a young woman from being strangled at a hotel in the Mile 4 area of Port Harcourt.

The woman, whose name could not be immediately ascertained, was said to have struggled with the man, who attempted to strangle her with a pillow while she was asleep.

The state Commissioner of Police, Mr. Mustapha Dandaura, disclosed this while speaking with scores of women protesting the serial killing of young females in hotels in some parts of the state.

It was gathered that the latest victim had slept off, but woke up around 2am only to notice that the man was trying to kill her with a pillow.

A source in the Mile 4 area said the woman raised the alarm when the man became violent and engaged her in a struggle as she tried to open the door.

The source stated, “The woman went into the hotel on the man’s invitation and when she slept off, the man tried to killed her with a pillow. She was lucky to have woken up as the man tried to pin her down.

“The woman immediately shouted for help and the people in the hotel called the police, who raced to the scene and forced the door open. The police eventually rescued the woman and arrested the man.”

Confirming the incident, Dandaura said the suspected killer was arrested by his men when they got to the hotel, adding that a thorough investigation had commenced into the matter.

The state Police Public Relations Officer, Mr Nnamdi Omoni, said the suspect had been moved to the State Criminal Investigation and Intelligence Department.

Omoni explained that preliminary investigation revealed that the suspected killer was an indigene of Akwa Ibom State.

He stated, “The young woman escaped, because she was able to raise the alarm around 2am. She was sleeping and suddenly woke up to see the man, who brought her to the hotel, charging at her.

“The man tried to strangle her and he was arrested by our men. He is from Akwa Ibom and is a builder. He told us that he was a school dropout. The people in the hotel called the police, who rushed to the place, rescued the young woman and arrested the man.”

Meanwhile, scores of women took to the streets of Port Harcourt on Wednesday in protest. They called on the police and other security agencies to fish out those behind the serial killing of young women in hotels in the state.

The women, who were clad in black attire, marched to the Government House, the Department of State Services office and the state police command headquarters.

The President, Port Harcourt South, District 9141, Rotary International, Mrs. Rita-Marley Nkembueze-Idonor, urged the police to carry out an unbiased but speedy investigation into the killings with a view to apprehending those behind the dastardly act.

Handing over a communiqué signed by 77 women and other groups to the Secretary to the State Government, Dr Tammy Danagogo, the Rotary president urged the state government and the police to prevail on hotel owners to install closed-circuit television cameras in strategic points on their premises.

Nkembueze-Idonor said, “We have looked at the serial killings of women in Rivers State and we are saying no to the killings. We are saying that a thorough, unbiased and speedy investigation should be carried out by the police with the aim of putting an end to these killings.

“Also, a public apology should be made regarding the comment by the police that all the women, who were killed, were prostitutes. All hotels should have CCTV cameras; they should also embrace a proper way of getting the details of every guest. Police emergency numbers should be pasted in all hotel rooms and other public places.”

She stated, “We want to ask you to take our message to the governor. He is the chief security officer of the state and we believe that it is his responsibility to protect us as mothers, daughters, wives, sisters and children. If nothing is done immediately, the killings can spread.

READ  Atiku Calls On Nigerians To Speak Up Against Tyranny

“So, we will like you to take our message to the governor so that he can talk to us and tell us what he is doing to make sure that these killings stop.”

Danagogo told the women that the state government was in touch with the security agencies to put an end to the killings, even as he apologised for the comments credited to the police on the trade of the victims.

He said, “We have held several meetings with all the security agencies in the state and discussed what should be done. We have taken into consideration, especially the issues concerning the proper documentation of guests, installation of CCTV cameras and others. You know that if this affects you, it certainly affects me, and of course, it affects the governor too.

“It is not a matter that the governor will allow to lie low. Even the police are not sleeping over this matter. On the aspect of the police calling our daughters and sisters prostitutes, I doubt that the CP or the PPRO will say that.