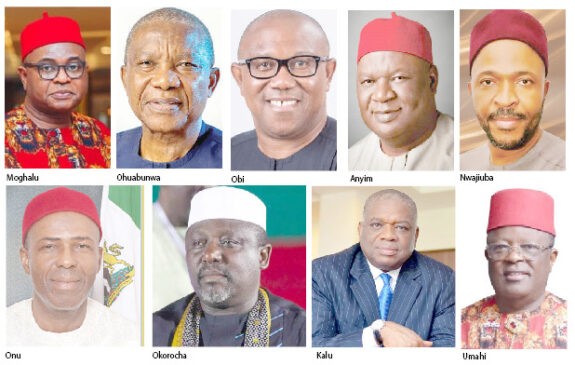 It is now a well-known fact that the outcome of the presidential primaries of the two major political parties, the All Progressives Congress (APC) and the Peoples Democratic Party (PDP), has created some disquiet in the South East. Ohanaeze Ndigbo, the body that pushed hard for the actualization of a Nigerian president of Igbo extraction in 2023, has been unable to come to terms with it. That is why it has not commented on the development since the conclusion of the presidential primaries. When it eventually attempted an interjection last week, it was a poor show. Neither the president-general nor the publicity secretary was on hand. Rather, a mere Imeobi member who could not even articulate his thoughts well pretended to be speaking for the apex Igbo socio-cultural organization.

Ohanaeze’s disposition in this matter borders on half measures. The body, together with the Igbo Council of Elders, was vociferous and vehement in its demand for the APC and PDP to produce their presidential candidates from the South East. When this did not happen, it was expected that Ohanaeze would immediately weigh in on the development. Those who had been following its position on the issue at stake expected a clear and unequivocal statement from Ohanaeze. It needed to take its agitation to a logical conclusion. But none came. Professor George Obiozor, the president-general, and his team simply went dumb. Many wondered what could have befallen Ohanaeze along the line.

So far, we do not seem to know when and where Ohanaeze lost it.

But we can discern something from the recent outburst of the governor of Ebonyi State, Dave Umahi. The governor has accused the Obiozor-led body of betrayal and sellout. He said Obiozor abandoned the Igbo presidency cause when it mattered most. Obiozor has been mute since Umahi blurted out. What really is the true position of things? Obiozor and his team may do well to throw light on this matter.

But whatever the undercurrents, the concerned public has since denounced the way the Igbo at the frontline approached the delegates’ election that produced APC and PDP candidates. southeast delegates, from the results of the primaries, did not vote for their kinsmen in the race. They sold their votes to the highest bidders from outside their region. This development has since cast a shadow of doubt on the seriousness of the Igbo to reverse the seeming restrictions that they face in their quest to have one of their own assume the presidency of the country.

The latter-day clay-footedness displayed by Ohanaeze in this matter is regrettable. It smacks of betrayal of trust and confidence. But then, the Umahis of the South East who have been quick to condemn Ohanaeze and Igbo elders in this matter have their own baggage to contend with. We recall that Umahi left PDP because, as he saw it then, the party had no plans to cede its presidential ticket to the South East. Consequently, the governor pitched a tent with the APC. But his new party did not act differently. Like the main opposition party, it did not cede its presidential ticket to the South East. This development is supposed to leave Umahi in the cold. His calculations failed. The APC did not provide him with the succor he was looking for. Umahi’s move was, therefore, an exercise in futility. His defection was a blunder.

After the miscalculations and dashed hopes that went into the Igbo presidency project, the people should adjust quickly to the reality of the situation. That reality is that the Igbo of the southeast should return to the drawing board. Where did they get it wrong? They need to quickly dissect and digest this matter and come up with a road map that will lead to their idea of the Promised Land. But that is an agenda for the future. For now, the Igbo must work with the reality that they have on their hands.

One of them is the Peter Obi presidential aspiration, which we have had cause to reflect on in this column on a number of occasions. What is new and fresh at moment is the emergence of a western Igbo as the vice-presidential candidate of the PDP. This development has been eliciting excited discourses among commentators and analysts. The most commonplace of such discourses is that the Igbo are not, after all, left out in the 2023 calculations. Even though Ohanaeze, while insisting on a Nigerian President of Igbo extraction, warned Igbo politicians against accepting the vice-presidential offer, they have, at the end of the day, were tempted with what they had said they did not want. The little difference here is that Ifeanyi Okowa, whom the lot fell on, is an Igbo of western extraction.

But what difference does it make? That is the question on the lips of many. A few days ago, a Fulani associate, while reviewing the current set-up with me, wondered why Igbos discriminate among themselves in matters of this nature. According to him, Fulanis, wherever they may be or in which corner of the globe they find themselves, do not discriminate against one another. He advised the Igbo to dismantle the barriers and encumbrances that prevent them from viewing themselves from one prism. According to him, if the Igbo do this, no segment of the Igbo nation would have an issue with which part of Igboland Okowa comes from.

This reasoning should, ordinarily, be the new normal. But those who think the way this my Fulani associate does have been reminded that the Igbo situation is somewhat peculiar. The problem here is that a good number of the Igbo outside the South East, owing to the unenviable station of the Igbo in Nigeria, are easily given to denying and repudiating their Igboness. This has been one major source of alienation between the Igbo of the South East and those of the South-South. However, the fact of the matter is that situations like this arise only when it is convenient to indulge in such nebulous distinctions. The Igbo, when it matters most, will usually flock together as one.

Already, the Okowa vice presidential ticket is bringing this to the fore. The man himself has described himself as an Igbo man from the South-South. This, really, should put paid to all the misgivings that his choice as a vice presidential candidate is generating. But will it? That will depend on Okowa’s disposition. Will he look eastwards in words and in deed? We wait and see. But what will really matter at the end of the day is for the Igbo to identify their strategic political interests and work towards bringing them to fruition without being constrained by geographical considerations. Ohanaeze could take the lead in the realization of this new order, rather than engaging in half measures.