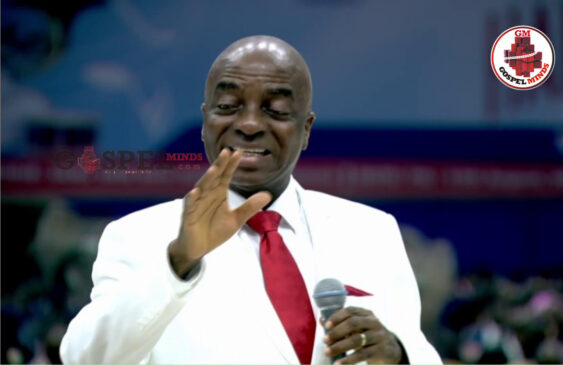 The Founder and presiding Bishop of Living Faith Church Worldwide alias Winners’ Chapel International, David Oyedepo, has maintained that people who do not give a tenth of their income to the church are under a financial curse Oyedepo, who is said to be Nigeria’s wealthiest pastor, according to Forbes, said this in a tweet. The cleric tweeted, “Tithing is an inescapable covenant obligation. Prosperity not just wealth is impossible without tithing because when you are not paying tithe, you’re under a financial curse.”

In a subsequent tweet, Oyedepo said many problems men face could be traced to their financial dealings.

Tithing is an inescapable covenant obligation. Prosperity not just wealth is impossible without tithing because when you’re not paying your tithe, you’re under a financial curse.

“The way you handle your financial dealings determines greatly what happens to you financially. Many things that afflict men are traceable to their monetary dealings. False financial dealings can open doors to inexplicable afflictions,” he said.

Meanwhile a Renowned Televangelist, Pastor Benny Hinn has taken to social media to tender an apology to Christians for his false teachings while Oyedepo’s message was well received by many of his followers, some critics on social media described his message as archaic and improper.

The popular Israeli cleric, Benny Hinn, in a video on his Facebook page, apologized for his teachings on prosperity, sowing of seed, and monetizing the gospel.

According to the cleric, the apology was a necessity because he doesn’t want to be rejected in Heaven on the last day.

Oyedepo is the wealthiest preacher in Nigeria with a net worth of over US$150 million. The church owns four private jets and several buildings, including in London and the US.

Pastor Benny Hinn added that it is an offense to receive money for the things one does to publicize the gospel. He further stated that he had wanted to disclose this a long time ago but he couldn’t.

Oyedepo is an author and publisher who has written over 70 titles apart from periodicals. He is the chairman/publisher of Dominion Publishing House (DPH), a publishing arm of the ministry.

DPH has over 4 million prints in circulation to date. Through Oyedepo; Covenant University, Faith Academy, and Kingdom Heritage Model Schools have been established to equip the youth for global impact. The construction of a third university named Crown University is already underway, located in Calabar, Cross River, Nigeria

While Benny Hinn said, “This is the first time in my life that I am saying this and I don’t care what people think about me anymore. I know many will not invite me anymore and I don’t care. I don’t want to be rejected on the last day. If you are not giving because you love Jesus, don’t bother giving. Giving is making me sick to my stomach and I am free from it now, I don’t want to hear anything about the sowing of seed anymore. “I am truly sorry for all these years of false teachings. Please forgive me and do away with my messages on prosperity and sowing of seed”.