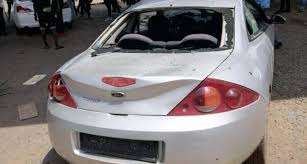 Some of those who condemned the attacks, in separate interviews with The PUNCH, alleged they were the handiwork of government.

There have been protests in most parts of the country since Wednesday  last week by Nigerians, mostly youths, who called for disbanding of SARS, accusing the police squad of corruption, high-handedness, and harassment

On Sunday, the Inspector-General of Police, Mohammed Adamu, disbanded the squad and on Tuesday, he set up the Special Weapons and Tactics Team to replace the disbanded SARS.

Despite the disbanding of the squad, #EndSARS campaigners presented five demands to the Federal Government, which the later on Tuesday said it had accepted.

The campaigners’  five demands include the release of all persons arrested by the disbanded police unit and justice for victims of police brutality; setting up an independent body to oversee the investigation and prosecution of all reports of police misconduct (within 10 days); psychological evaluation of all disbanded SARS officers before they can be redeployed, and increase police salary so that they can be adequately compensated for protecting lives and property of citizens.

But the protests took a fresh dimension on Wednesday when hoodlums bearing cutlasses and sticks attacked protesters in Lagos and Abuja.

Condemning the attacks, the pan-Yoruba group, Afenifere, stated that they reflected the divisive nature of the regime of the President, Major General Muhammadu Buhari (retd.). 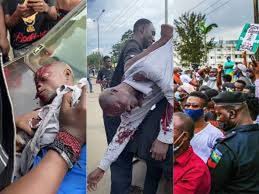 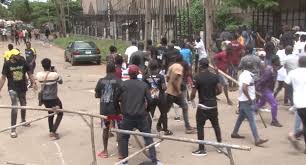 Its spokesman, Yinka Odumakin, in an interview with The PUNCH, said, “It is a reflection of the ‘we’ and them’  divisiveness of this government. We can only hope it would hand over a united Nigeria in 2023.

“A government that would mobilize on the ethnic line against protests against police brutality is a threat against the unity of the country and will run the country towards implosion.

“The regime cannot unite Nigerians on anything and when they unite themselves on a common issue, it finds a way to split them based on fault lines.”

On his part, an activist and Senior Advocate of Nigeria, Mr. Ebun-Olu Adegboruwa, said the government was to blame for the attack on the protesters.

He said, “Generally, the lesson from this spontaneous protest is for the government to accept the constitutional right of citizens to freedom of expression, association, and assembly, as guaranteed by sections 39 and 40 of the constitution. The people, who are in power now, the leaders of the All Progressives Congress, fully exercised these rights when they were in the opposition in holding peaceful protests.

READ  The real haters of Ndi Igbo By: Tochukwu Ezukanma

“So far since this #EndSARS peaceful protests started, it has been clear that the purpose of the protesters is to make a point.  In Benin, you see them protecting policemen. In Lagos, you see them feeding people. So, it is the government and sympathizers of those who are in power that is trying to infiltrate the protesters to give the semblance of violence and I think that will be counter-productive.

“I verily believe that what happened in Abuja today (Wednesday) with hoodlums attacking the protesters should be laid at the foot of the government. Having seen that the youth have been peaceful, it should be the responsibility of the government to grant them police protection.”

The  Director of Programmes,  Yiaga Africa, Cynthia Mbamalu, lamented that criminally minded– Nigerians had decided to empower the pro-government protesters to disrupt the peaceful #EndSARS protests.

Also, the  Chairman Board of Trustees, Centre for Transparency and Accountability, Dr. Chima Amadi, said the attackers were “unemployed youths whose frustrations were weaponized by hawkish elements within and outside of government.”

The  Executive Director, Civil Society Legislative Advocacy Centre and Chairman, Amnesty International Nigeria, Auwal Musa Rafsanjani, stated, “It’s not about northerners and southerners.  It is about some elements that are deliberately trying to create or further continue to divert attention from an issue that even the government acknowledges is bad.

“It is not about northerners because I’m from Kano and I am one of the leading voices who strongly opposed SARS and its brutal behavior against Nigerians and I have spoken widely in both local and international media like Aljazeera, BBC, Radio France, Radio Germany, and several national media condemning and calling for accountability and investigations for all those SARS members involved in human rights violations, extortion, and misconduct.”

The NBA described as said attacks on #EndSARS protesters in Abuja and Lagos.

The Publicity Secretary of the NBA, Dr. Raps Nduka, in an interview with one of our correspondents, said “It is quite sad that such a thing would happen. I believe that protests should be based on principles. In as much as we have different ways of reacting to things, the bottom line is the need to understand the reason for the calls for SARS to end. The problem is that there is no accountability.

“That is why things have got to an extent that the youth can no longer take it, and that is why they are protesting.

“We had a press conference yesterday, and one of the things we demanded was an audit of what has been going on at the SARS unit.

“In as much as some people would have a different approach, this style of staging a counter-protest against others agitating for a change should not be encouraged.

“But if we allow the state of affairs to remain like this, it will keep on going on.  The fact is that nobody is too sure of who will be affected by the act of tomorrow.” 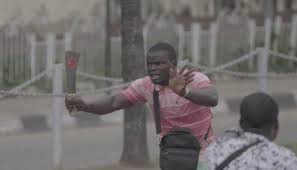 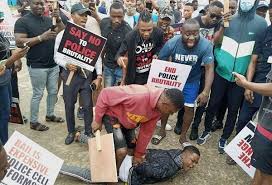 He added that the protests had continued because the people no longer believed the government was ready to make genuine changes, citing instances of how successive Inspectors-General of Police had ordered an end to the mounting of checkpoints on highways and serially disbanded the notorious Special Anti-Robbery Squad without any lasting effect.

“The government has to go the extra mile to make people believe that it is ready to take concrete steps this time.”

In a related development #EndSARS on Wednesday rejected the newly formed SWAT.

The campaigners, who continued their protests in Warri and   Effurun in Delta State,   described the newly formed  SWAT as just another name for the disbanded SARS.

One of the protesters, Igho Tietie, told journalists that Nigerians were not satisfied with the disbandment of SARS and the establishment of SWAT.

A  leader of the protesters, Deji Adeyanju, also dismissed SWAT, saying the authorities must address the recruitment process into the police, noting that the police had become a dumping ground for rogues and drug addicts.

Another leader of the movement, Aisha Yesufu,  asked the IG to start the police reform with the prosecution of officers involved in extrajudicial killings.

The NBA and the National Human Rights Commission, on Wednesday, met with the House of Representatives over anti-SARS protests.

Both the NBA and the NHRC sought legislative interventions by the House, especially on the amendment to relevant laws to reform the police.

The  President of the NBA, Olumide Apata, said the association visited the House to discuss what could be done on police reforms.

Responding, Gbajabiamila recalled that the House had taken steps on the matter, including a review of the existing laws governing the police and a plan to introduce an amendment bill within 30 days.

Akpata also raised the issue of some Nigerians being detained unnecessarily at different police stations, calling on the Speaker to intervene.

Gbajabiamila asked the NBA president to identify all the police stations where people were detained for the House to raise a delegation that would meet with the NBA and get them released.

Meanwhile, a coalition of youth organizations in Kano, under the auspices of the Movement for SARS Reformation, on Wednesday staged a peaceful protest to decry the scrapping of the Special Anti-Robbery Squad and instead recommended the reformation of the Nigeria Police Force.

READ  The Electricity Tariff Hike Of July 1 Has Been Suspended

The youths besieged the Kano State Government House and demanded urgent overhaul and re-orientation of the police.

Briefing newsmen, the convener of the coalition, Khalid Kani, appealed to Governor Abdullahi Ganduje to prevail on the President, Major General Muhammadu Buhari (retd.) to consider reforming the police and the SARS to streamline the operations of the unit.

Protesting youths stormed the Lugard House seat of the Kogi State Government in Lokoja and added their voices to the growing demand for an end to extrajudicial killings and police brutality.

That was the first time a protest took place in the state since the #EndSARS began last week.

The youth demanded to see Governor Yahaya Bello, who according to his Chief of Staff, Jamiu Abdukareem, was presiding over the weekly State Executive Council meeting, but the protesters insisted on not leaving until he addressed them.

However, as of the time of filing this report, the governor had yet to address the youth.

Ogun State Governor, Dapo Abiodun, on Wednesday, said Nigerian leaders had always taken the youth for granted and for too long.

The governor urged his colleagues to adopt a paradigm shift on a matter concerning the youth.

Abiodun stated this when he addressed the #EndSARS campaigners, who marched on his office during a peaceful protest at Oke-Mosan, Abeokuta.

He said with the raging protests across the nation, the leaders had started taking them seriously.

According to the governor, the Federal Government has no choice but to listen to the voice of the protesters as it is evident that the police and other security agencies need to put a stop to the brutality of citizens across the country.

He said, “The youth have a voice that must be given attention. The whole country has listened to you. As a matter of fact, the whole world is listening to you. You have demonstrated commitment; you have shown that you can rise when the occasion warrants it and you can speak out.

“I think that in the time past, we had sort of taken you for granted and I am saying that with all sense of responsibility; we have taken our youths for granted because the issues you are raising today are not new to us. They are issues we have been living with for so many years.” – Punch.