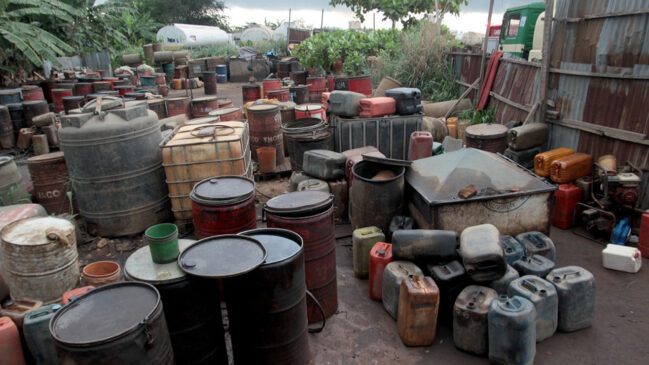 LETUGBENE- STRANGE  to onlookers, Letugbene, Ekeremor Local Government Area, Bayelsa State, has been under the vice-like grip of a militia, comprising oil bunkers, kidnappers and sea pirates, who commandeered the community, about two years ago, and compelled a rule of fear in the riverine fishing community.

The terror gang led by an indigene, Victor, who is the top dog, ran the paramount ruler of the community, HRH Roman Darabebe, and other vocal residents out of the creek enclave.

NDV could not confirm if HRH Darabebe lodged a formal report with the state government or briefed security agencies on the ordeal of his people, but we gathered that he fled to another creek community in Burutu Local Government Area of Delta State.

For some period, the hoodlums took over the community’s town hall built by Shell Petroleum Development Nigeria Limited, which they turned into their operational headquarters.

It took a raid on the community, penultimate Saturday,   by the Joint Task Force, in search of a group of militants, who stole rifles from seven kidnapped Navy officials,  in May, this year, for some bits and pieces to come into the open.

Our findings revealed that the leader of the militia, having hijacked the leadership of the community, was in charge and forced other indigenes opposed to his ‘parallel government’ to escape from the town.

The militia oiled its operations with funds from crude oil bunkering, known in local parlance as Kpofire, robbing of passengers on the waterways and kidnapping for ransom.

Nobody could challenge the outlaws until their nefarious activities went beyond Bayelsa to neighboring Rivers State, in May, this year, where they daringly abducted seven naval personnel with their weapons and secreted them in the community.

The hoodlums appropriated the waterways in the area; freely stopped passenger boats and dismantled the engines as well as dispossessed people, including natives, of their valuables

In recent times, Letugbene has become an isolated community as boats from Warri no longer sail to the area.

NDV gathered that the community folks, together with the leadership, are at variance on the militia; some are sympathetic to the bunkering operators while those opposed were frightened and fled.

A community source told NDV that the boys have accumulated money and power from the lucrative kpofire business.

However, the atrocities of the militia came to the fore when vigilant intelligence operatives apprehended two of the members returning from a trip to Oporoza in Delta State at Bomadi Enroute Letugbene

They confessed on interrogation that the militia hid the rifles stolen from naval personnel in Letugbene.

Recall that while some of the abducted officers escaped and others were rescued by a combined team of JTF, operatives did not recover the stolen rifles.

They did not find the stolen rifles in the penultimate Saturday’s operation, but they burnt houses suspected to be harboring the gangsters, including the community hall they seized from indigenes.

What I know about stolen rifles  —Samuel, bunkerer

One suspect, Samuel Isaiah, a bunker and elder brother to another major suspect, in a detention facility at the Nigerian Navy Ship, NNS, Soroh, Yenagoa, admitted to being in the custody of the guns because his younger brother (top dog) was on the run.

His words: “My name is Samuel, I am into oil bunkering, I started the business in 2012 when I came back from Lagos. I have 14 boys in our barracks (camp) and we have seven rifles. We have 125 horsepower boats. I went into kpofire because I saw other people doing it.

“The day the military came with gunboats to Letugbene, I was working in the bush with my people. About the kidnapping issue, I am not aware but I heard that people took soldiers to the community; I can take you to my camp where I am doing my kpofire business.

“Victor is the one that has the rifles, but they were in my custody. When I heard that Tompolo was having a meeting about plans to stop bunkering, I handed over the rifles to Akpos and went to attend the meeting called at Tompolo’s place, it was on my way back that they arrested me.

“I was told that they would kill me because of the weapons. They then told me that somebody had taken the rifles back to Rivers State.”

How they arrested me—Tarilate, suspect

Another suspect in detention, Tarilate, who claims to be a native of Furopa in Southern Ijaw Local Government Area, said he had seen the prime suspect, now at large, parading with the stolen guns in the community.

“Samuel is married to my wife’s younger sister, so Samuel called me to come and follow him to Tompolo’s place to see how they will share the surveillance contract job per community. On our way back, they arrested us in Bomadi when we wanted to board a boat to Letugbene. We were five, but three others escaped.

“They asked me what kind of job Samuel does and I replied that I used to see them carrying five guns in the community,  but that I am not based there, I only visited them.

“I do not know that the guns belong to the Navy because I have not stayed with them up to five days before they arrested us. I am jobless; Samuel asked me to come and he will give me some money. I only heard that the military went to burn their houses in Letugbene because they carried Navy officers from Rivers State and hid them in Letugbene, but I do not know if they collected their guns,” Tarilate said.

When NDV visited the community, there was a graveyard calm and the few persons on the ground clearly existed in palpable fear of the unknown.

They refused to speak apparently because of fear for their safety. The runaway paramount ruler, HRH Darabebe, was not around and an attempt to speak with him on his mobile phone proved abortive.

Community folks who spoke on condition of anonymity blamed their trauma on the inability of the leadership to expel the “bad boys” from Letugbene from the beginning.

“Before now, we used to have boats loading passengers from Warri to Letugbene but this is no longer possible since militants in the area are terrorizing the waterways and their own people. Nobody challenges them because of the weapons they wield.

“They stop passenger boats and remove the engines while the occupants who are their own people are dispossessed of their valuables,” he said.

A chief from the community, Chief Alex Aboitu, who had escaped to Warri, Delta State, over the activities of the militia, said: “Two years ago, Legtugbene community was a peaceful community, but last year, a militant group invaded this community and so many people from this community cannot come in.

“I have not been to this community for over one year because of the activities of the militia.

“Sometime this year, they kidnapped seven naval officers in Bonny, Rivers State and brought them to this community and hid them somewhere and in doing that, they took their guns.

“We are appealing to the federal and state governments and all relevant bodies to come to our aid and rescue us from these hoodlums, who are not only into bunkering but armed robbery and kidnapping, and beg them to return the rifles so that peace can reign in this community,” he said. Culled.