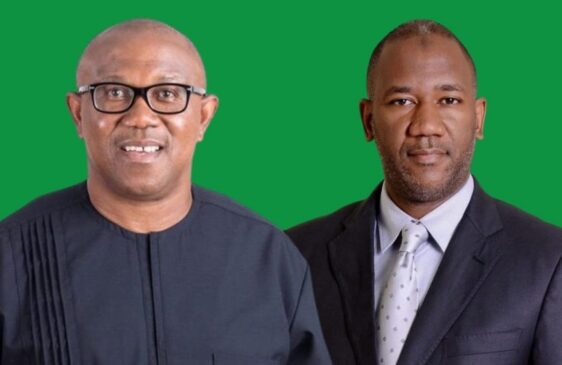 Now, let me say this publicly. Until a few days ago when it was clear that Senator Yusuf Datti Baba-Ahmed has been tapped as his ticket mate, I did not pay much attention to Mr. Peter Obi. I have not been particularly impressed with Obi’s impreciseness in answering questions and his rather irritating predilection to loading every sentence with unverified statistics.

But after reviewing Baba-Ahmed’s profile the other day, I was satisfied that he is capable of making up for Obi’s lapses. His solid academic background in economics, experience in business and a stint in the National Assembly, coupled with a reputation as the founder of one of the nation’s thriving private universities, make Baba-Ahmed the best vice-presidential choice so far.

Picking a VP candidate is the first duty of a presidential nominee. The choice usually gives an early insight into the mind of the man at the top of the ticket, his decision-making ability and his sense of purpose. With this selection, Obi has given a good indication that he is in tune with the mood of the nation and the yearnings of the people, especially the youths, who are earnestly crying for genuine change.

At 46, Baba-Ahmed is relatively young. He parades sound academic credentials, speaks well, looks urbane and exudes cosmopolitanism. He should connect well with our youthful population and attract their support the way Barack Obama did in 2008. And Obama was that age when he was elected the 44th President!

There’s no doubt that Nigerians, disenchanted, disappointed and irritated with the two men presented by the two major parties as presidential candidates, are crying for a genuine change. Their advanced ages and the fact that they made their wealth largely from the government with questions being asked have exasperated the people a great deal. In addition, the mounting security challenges, epileptic power supply, rising inflation, the general depressing mood in the country and the apparent ineffectuality of the Buhari administration have pushed the citizens into unprecedented despair.

Peter Obi and Yusuf Baba-Ahmed, therefore, provide a real alternative to those looking for a refreshing departure from a placid and staid old order. Obi’s rank is also swelled by supporters of Professor Yemi Osibanjo who were disappointed that the VP did not win the APC primary. For them, the Obi ticket is the closest approximation to what the cerebral law professor presented. Many, I recall, were swept off their feet by his inspiring messages in the months leading to the convention.

To some Nigerians, the emergence of Atiku and Tinubu presents a frightening prospect of an unintended extension of the Buhari rule.  I am shocked that the two major parties do not seem to realize how resentful Nigerians are of the duo. The enthusiastic embrace of Peter Obi in large numbers by young Nigerians, some of whom were not even born when Atiku first ran for President – and they’re the ones that expressed their anger in the EndSARS protests – are in essence a total rejection of the old guards. I am so glad that our young people are leading the charge to take back their country. I feel their pain, frustration and anxiety.

For the past four months or so, public universities have been shut and the students have been languishing idly around. I saw a young chap in my barber’s shop the other day. He told me he’s a geology student at the University of Calabar; learning to cut hair to occupy the time. Saddening. It is, therefore, imperative that these young people should register to vote. Can Peter Obi win this election?  It’s a daunting task, even with all the ecstasy and excitement following him. The peculiarity of our electoral process is a major factor. It is heartening that INEC has over the years improved the system considerably and put in place anti-rigging safeguards, but vote-buying has emerged as a new way to steal elections.

Does Obi have the billions to deploy in this manner? I doubt. Second, Labour Party does not have elected or appointed officials in any state of the federation. Loosely termed “structures” in our political lingo, these people who include commissioners, legislators, councilors and other appointees, are the main influencers of voters in our rural communities before and during elections.

Since Obi and Baba-Ahmed have contested and won elections before, I’m sure that they are acutely aware of this. To make up for the lack of elected and appointed officials, the Obi Campaign would have to resort to hiring campaign workers and recruitment of volunteers in each of the over 8,000 wards and 177,000 polling units across the country.

Their duty would be to take Obi’s message into the hinterland.  For now, the next order of business is for the Campaign to engage the services of effective political strategists and campaign spokespersons both at the headquarters and across the country.

The 2023 elections would be influenced by a few factors, notably religion, the Kwakwanso factor and the Atiku-Tinubu image. A message I received from a university professor as I write this piece summarises my point on the influence of religion and the reputation of Tinubu and Atiku on the outcome of the election. “I can’t vote for Atiku because if he wins, that would give the Northern Muslim Fulani 16 straight years. The implication of that is not only sad but frightening. I can’t vote for Tinubu because of his Muslim-Muslim ticket. His health problems would mean another Buhari in disguise. I’m, therefore, left with Labour Party”.

Indeed, Tinubu’s Muslim-Muslim ticket will also rob him of votes in some South-West states. Obi, on the other hand, will sweep through the whole of South-East and South-South which have been traditionally PDP strongholds. Both APC and PDP would also lose considerably to Rabiu Kwankwaso of NNPP in Kano who will also make inroads in some Northern states. My sense, therefore, is that none of the candidates may score an outright win. A run-off presidential election seems likely next year.