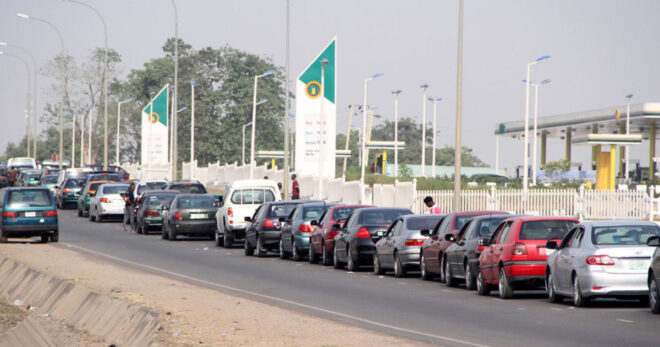 The Nigerian National Petroleum Company Ltd, NNPC, has revealed that the recent fuel queues in Abuja are likely caused by low loadouts at depots which usually happens during long public holidays.

The NNPC disclosed this in a statement on Sunday night while reacting to re-appearing fuel queues in Abuja.

The Corporation added that it is working with its marketing partners to take necessary measures to ramp up loadouts from all depots.

Reacting to mild queues in the Federal Capital, they said, “The NNPC Ltd notes the sudden appearance of fuel queues in parts of Abuja. This is very likely due to low loadouts at depots which usually happen during long public holidays, in this case, the Sallah celebrations.

“Another contributing factor to the sudden appearances of queues is the increased fuel purchases which is also usual with returning residents of the FCT from the public holiday.”

NNPC disclosed that the Nigerian Midstream and Downstream Petroleum Regulatory Authority in conjunction with its marketing partners have taken necessary measures to ramp up loadouts from all depots.

“We assure all residents of the FCT, and indeed all Nigerians, that we have ample local supplies and national stock in excess of 2.5 billion liters, with the sufficiency of more than 43 days.

“The NNPC Ltd hereby advises motorists not to engage in panic buying as supplies are adequate as will become increasingly evident in the coming days,” it said.

A few months ago, major cities in the country were hit with long queues at filling stations caused by a scarcity of Premium Motor Spirit (PMS), otherwise known as petrol.

It was later revealed that the shortage of fuel supply was caused by the withdrawal of adulterated petrol by the sole importer of the product, the Nigerian National Petroleum Corporation (NNPC).

Following the investigations, the NNPC explained how the adulterated petrol was imported into Nigeria from Belgium undetected as well as the oil companies that brought it in.