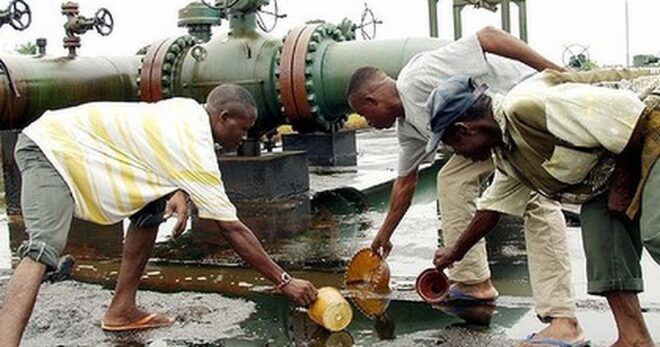 The Trans-Niger Pipeline, a major pipeline that typically transports about 180,000 barrels of crude per day, has been dry since June.

Oil theft is the main reason Nigeria is struggling to meet OPEC output cut, it was reported that this is happening because the pipeline has been vandalized in more than 150 places by criminals who specialize in oil theft.

Efforts by the Nigerian Government to combat the criminals have proven to be futile, thus making oil theft the most chronic problem affecting oil companies in Africa’s largest oil-producing nation.

The problem is such that oil producers have only been able to receive 5% of all the crude volumes transported through the pipeline between October last year and February this year.

“Two of our most important pipelines in this country today are shut down with hundreds of thousands of barrels a day shut-in. It is a fact that the issue of theft, whether as a standalone or as the basis for us to meet our OPEC quota is an existential threat for this industry,” Mr. Okunbor said.

Other notable stakeholders in the Nigerian oil and gas sector have also voiced their frustrations over the issue.

For context, the Trans-Niger Pipeline’s 180,000 barrels daily capacity resents about 15% of Nigeria’s most recent daily output quota of 1.772 million barrels, as set by the Organisation of Petroleum Exporting Countries (OPEC). Business Insider Africa understands that the West African country has been pumping about 534,000 barrels daily, which is 30% below its output quota.

In June, a report by the International Energy Agency (IEA) noted that African crude oil producers (of which Nigeria is number one) have failed to take advantage of the surge in oil prices due to their inability to build capacity.