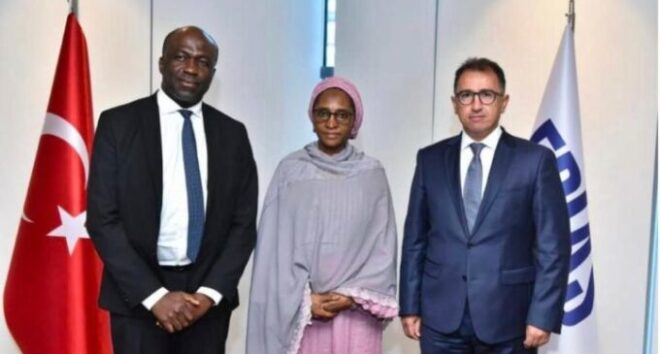 The Nigerian Bulk Electricity Trading (NBET) says it has signed a Memorandum of Understanding (MoU) with a Turkish Energy firm, Energy Exchange Istanbul (EXIST) to boost the power supply in the country.

Mr. Yunusa Abdulahi, the Special Adviser, Media to the Minister of Finance, Mrs. Zainab Ahmed said that the agreement was to boost cooperation and knowledge exchange between the two countries.

Abdulahi said that the cooperation agreement, signed between NBET and EXIST at its campus in Maslak, Turkey, was designed to explore mutually beneficial opportunities for growth between both agencies.

He said that Turkey as a country has a generation capacity of 100 Gigawatts, equivalent to 100,000 Megawatts of electricity.

‘According to him, Turkey is Europe’s sixth largest electricity market and the 14th largest in the world.

”Making Turkey the 5th largest generator of renewable energy in Europe and the 12th largest in the world.

”The country is well advanced in electricity infrastructure and cross-border trading.

”There is a lot of optimism in this new partnership, especially as the government of Turkey has shown keen interest in strengthening bilateral relations between both countries,” he said.

Abdulahi said that the signing of the MoU was witnessed by the Minister of Finance and Chairman of NBET Board of Directors,  NBET’s  Chief Executive Officer, Mr. Nnaemeka Ewelukwa and EXIST CEO Ahmet Türkoğlu.

Speaking during the signing of the MoU, Ahmed said, “EXIST has reached an admirable stage”.

” We also want to establish electricity markets by providing the necessary transformation in our country.

”We want to cooperate with you on this journey by walking hand in hand,” she said.

On his part, the CEO of NBET said that the cooperation agreement with EXIST would go a long way in re-positioning NBET for enhanced performance in the Nigerian electricity market and consolidating its accomplishments.

Ewelukwa said the key aspects of the cooperation would see NBET strategically leveraging cutting-edge technology to chart a new course in its commercial transactions in the electricity market.

”It will ultimately pave the way for more power investments in the country and deepen competition in the market with greater value delivery to participants in the market,” he said.

According to him, NBET will also synergize with EXIST in developing a framework for upscaling sustainable investments in renewable energy in line with the Federal Government’s commitment to diversify the country’s energy mix and transition to a low-carbon economy.

”The agreement also ties in neatly with NBET’s long-term plan of leading Nigeria’s renewable energy push in line with its mandate.

”The agreement covers the transfer of experience and business knowledge, and the design of a functional trading structure for the Nigerian Electricity Supply Industry.

”With this partnership, the NESI can leverage on the EXIST experience towards the design and implementation of policy frameworks that will ramp up energy solutions to the manufacturing sector and other vital economic sectors

”Towards increasing the GDP of Nigeria and improving the living conditions of its people,” he said.

The NBET boss said that the agreement was also aimed to liberalize the current market in Nigeria; simultaneously.

He said that the parties had agreed to establish a partnership to support the optimization of NBET’s current energy portfolio and identify sustainable means to scale up energy generation and supply in Nigeria.