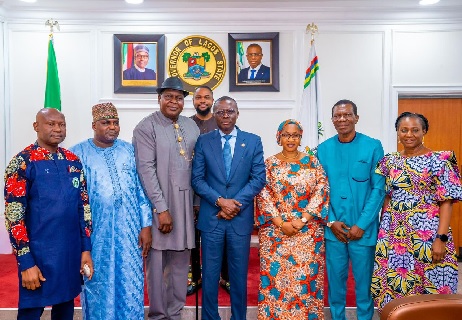 Lagos State Governor took to effusive celebration and commendation of Director General National Council for Arts and Culture(NCAC), Otunba, Segun Runsewe, to what he described as Runsewe’s dogged patriotism in promoting Nigeria unity and cohesion

The Governor, who was highly elated at Runsewe’s promotion of Nigeria’s indigenous fashion and on this day in the full revelation of the beauty of the South-South dress pattern, praised the NCAC boss for always putting Nigeria first in his manner of speech, public conduct, dress sense and above all consistent call for the best of Nigerian culture and tradition.

Sanwo Olu, who received Runsewe and select members of the Technical Committee on NAFEST insisted that Lagos state will bring a new vista to hosting NAFEST in November, noting that the unity of Nigeria should be paramount in the effort of using culture as a vehicle of promoting national unity and cohesion.

He assured Sanwo-Olu that NCAC will not fail in the mission to use arts and culture to bring Nigerians together, vocalize the advocacy for love and temperance among Nigerians and bring all shades of opinion in Nigeria to love and respect each other.