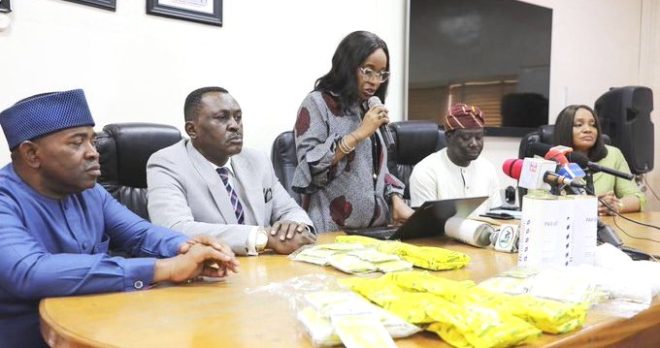 The National Agency for Food and Drug Administration and Control has arrested some people involved in the importation and distribution of substandard food products to Nigerians.

The Acting Director-General of NAFDAC, Dr. Monica Eimunjeze, made this known in a press statement on Monday.

She explained that the arrests were part of the Agency’s efforts to curb the menace of importation, sale and distribution of counterfeit regulated products and ensure that only wholesome, safe, quality and efficacious products were imported, manufactured, distributed, sold and used by the Nigerian populace.

According to Eimunjeze, operatives of NAFDAC raided and arrested suspects in connection with various fraudulent activities and cases.

Eimunjeze stated that in the first case, a warehouse containing potassium bromate tablets and an unregistered imported EDC-2000 bread improver was discovered.

Eimunjeze said: “On the 7th of December 2022, NAFDAC officers raided a warehouse in the Apongbon area of Lagos Island in Lagos where they found 115 cartons of Potassium bromate tablets.

“Also found in the warehouse counterfeit EDC Bread Improver, packed in sachets with a fake NAFDAC registration number 01-4242, worth N300,000:00.

“One Rapoluchukwu Joseph was arrested as the importer during the operation.

“As you are aware, Potassium bromate is a banned flour improver globally as it is a known cancer-causing agent. It can also cause kidney failure among other ailments.

“Potassium bromates popularly known as tablets in the black economy are always attractive to merchants of death who want to make outrageous profits at the expense of citizens’ well-being.

“This is because apart from improving the texture of a loaf, it also increases its volume, and it is relatively cheap.

“For example, the seized tablets could be used with 300,000 bags of 50kg flour to produce about 30 million family-sized loaves of bread.”

Eimunjeze said that there were recommended healthy flour improvers approved by the Agency.

She warned that any flour product containing potassium bromate will be confiscated and the producer will be made to face the wrath of the law.

The batches number were the same number for various batches and the street value of the counterfeit Super Delicious Cooking Margarine was placed at N8,000,000.

Giving a background of the arrest, Eimunjeze said: “NAFDAC on the 9th of September, 2022, commenced an investigation which led its operatives to a long span of operations at four States of the Federation namely; Kano, Kaduna, Delta, Abia, and Lagos states.

“After rigorous and painstaking efforts, the Agency’s operatives traced and arrested one Owerekwe Obinna Michael, 46, of 12 Boundry Street, Aba, Abia State as the importer of the counterfeit product.

“At the point of his arrest, the suspect upon sighting the operatives destroyed his mobile phone so that the evidence would not be traced to him.

“He also fought the operatives but was instantly overpowered, arrested, and taken into custody.

“He confirmed that he actually imported 400 cartons of the product with the above details from Dubai through groupage and cleared them at Onne Port, Port Harcourt.

“He claimed that the shipment was delivered to him by a clearing Agent, whose name he did not yet disclose.

“He also admitted to distributing the product to Markets across the country.

“A preliminary examination of the product showed that the actual manufacturer’s name was not written but produced for a company in Indonesia.

“The public is enjoined to watch out for these injurious products anywhere in the country and report same or any suspected fake or counterfeit or unwholesome product to the nearest NAFDAC Office.”