The Nigerian Air Force in partnership with the British Military Advisory Training Team has trained 150 Advanced Special Forces operatives to be deployed to troubled areas to help in tackling security challenges bedeviling the country.

He said, “Out of the 285 personnel nominated for the course, only 150 were found fit after a series of medical and physical screening and inaugurated to commence the course. At the end of the course, 145 personnel, comprising three officers and 142 airmen will be graduating today and they have been found worthy in character and learning to qualify as Advanced Special Forces Operatives, also known as Nigerian Air Force Panthers.”

Daramola said that the Special Forces operations are characterized by speed, precision, destabilizing shock effects, and perseverance which require that these Special forces operations were painstakingly selected to ensure the attainment of desired effects and outcomes.

“The kinds of effects that Special Forces operations can deliver are very critical at this material time because present threats to our national security are from violent non-state actors waging terrorist and insurgent campaigns against the Government of the Federal Republic of Nigeria. 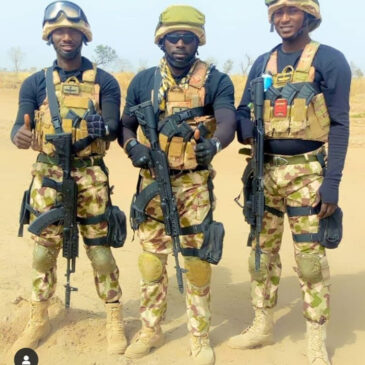 In his speech, the Chief of Air Staff, Air Marshal Oladayo Amao, expressed optimism that the graduating students had imbibed the necessary skills, tactics, techniques, and procedures required to conduct special operations to achieve the objectives of the Nigerian Air Force.

Amao, who was represented by the Chief of Policy and Plan, Air Vice Marshal Charles Ohwo, said in furtherance of his vision of enhancing and sustaining critical airpower capabilities required for joint force employment in pursuit of national security imperatives, the Nigerian Air Force has so far trained about 5,000 Regiment and 2,000 Special Operations Forces personnel.

“We appreciate British Military Advisory Training Team’s continued support and look forward to more of such collaborations, including the next batch of the Advanced Special Operations Forces training,” he said.