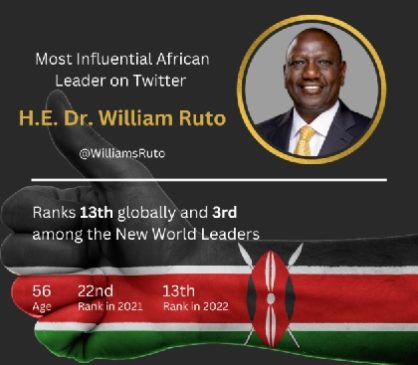 Social media for world governments, much like global citizens, is a tool that is used to influence, entertain, and or inform people.

Twitter to be specific is a digital tool that could be used to great harm or incredible benefits, depending on how responsible the user is. This is owing to the platform’s utility which allows users to spread information.

For world leaders, this tool has been used to massive effect, and now more than ever, government officials can use Twitter to boost their popularity or self-sabotage. Either way, Twitter has become a powerful channel for governments across the world to liaise with their people.

In recognition of this, BWC Twiplomacy, a digital company that has taken on the responsibility of tracking the rise of digital diplomacy since 2012, recently released its World Leader Power Ranking list.

In this list, 50 leaders were ranked based on their influence on Twitter. According to the platform, Twiplomacy’s Power Ranking uses a bespoke algorithm to rank world leaders by their global Twitter influence based on BCW’s methodology.

The report also used the following variables to determine the list; gender, age, length of time in office, year-on-year comparison, and the proportion of tweets with either photo or video content.

Variables relating to the countries studied include ​the country’s GDP per capita, internet penetration, income level based on the World Bank’s categorization of the country, population size, and languages of tweets (English, French, Spanish, Arabic)

These variables, when factored in, show the leaders who have had the most impact on its people via Twitter, and those who have not.

As mentioned earlier 50 leaders made the list, but of these 50 leaders, only 9 were African. Below is a list of these 9 African leaders, the 9 most influential African presidents on Twitter.