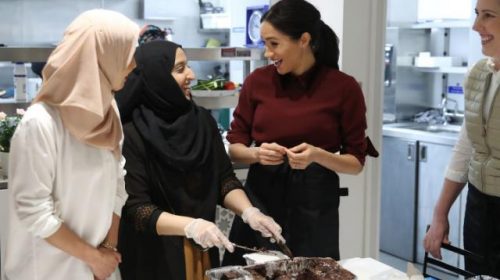 In newly surfaced photos, Meghan Markle and Prince Harry can be seen posing with Adele, along with a group of women at the Hubb Community Kitchen in London. While separate photos of the celebrities were previously shared back when the event first took place in 2018, it’s beyond adorable to see the entire group laughing together.

Meghan Markle and Prince Harry had a private engagement yesterday at Hubb Community Kitchen in London, but they weren’t the only special guests; Adele came by too. Royal correspondent Omid Scobie shared the news on Twitter.

Munira Mahmoud, one of the chefs and founders of Hubb, shared photos with Adele on Instagram. She even mentioned that the singer came by to cook with the “2 days in a row.” However, it’s unclear whether Adele and the royal couple visited at the same time.

The community kitchen, based in Al Manaar Muslim Cultural Heritage Centre in London, was established by women who survived the Grenfell Tower fire, which killed 72 people in June 2017. Adele has been a vocal supporter of those affected by the tragedy.

Hubb (which means “love” in Arabic) came to be after women displaced by the fire started using the kitchen at Al Manaar to cook for their families and communities, share recipes, and support each other. Meghan, a known women’s advocate, started visiting the kitchen privately in January this year. She was last seen stopping by in November.

Meghan features recipes from the women of Hubb in Together: Our Community Cookbook, her first solo project as a royal. Proceeds from the book help keep the kitchen open and running throughout the week.

“I immediately felt connected to this community kitchen; it is a place for women to laugh, grieve, cry and cook together,” the duchess writes in the foreword. “Melding cultural identities under a shared roof, it creates a space to feel a sense of normalcy – in its simplest form, the universal need to connect, nurture, and commune through food, through crisis or joy – something we can all relate to.” In September, Meghan invited members of the kitchen to prepare their dishes from the cookbook at Kensington Palace.