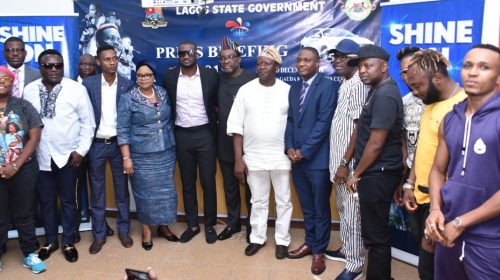 Lagos State Government is set to put more smiles on the faces of residents of the State. During the 2018 edition of the annual One Lagos Fiesta  and this time, will be bigger, as the other years, the entertainment hub of Africa witnessed various invigorating performances by Nigeria’s biggest music exports such as Davido, Wizkid, Olamide, and many other artistes.

But this year, Lagos State’s biggest fiesta is back with a twist, which offers a raffle draw game as the winner will get to walk away with brand new car by GAC motors. While at the official press briefing of 2018 edition of the One Lagos Fiesta, the State Commissioner of Tourism, Mr. Steve Ayorinde described the eight-day fiesta as the biggest entertainment brand which provides visitors with a platform to have fun for free.

“We are taking this advantage to appreciate Lagosians who have supported this administration through the years. From our findings, it is anticipated that this will affect millions of Lagosians who live and earn a living in Lagos State.”

Ayorinde continued “As you may be aware, Lagos prides itself as the vibrant seat of tourism to attract foreign investors towards making Lagos Africa’s model city. But this year, there is a twist. It’s the first year that a lucky winner will go home with a car from GAC motors, but the potential winner must have a PVC in order to qualify for the raffle draw.”

The commissioner, while reiterating that one of the  aims and objectives of One Lagos Fiesta is to elevate up and coming artistes in Lagos, he further said

READ  Festivals In Nigeria: A Healthier Way To Understanding Our Witty Cultural Heritage

“It is not just about celebrating the end of the year, it is a hub for people who want top notch entertainment as well as youths and children who want to fun for free. And festivities will include the children’s corner from 12 pm 6 pm to children with games and cultural performances free of charge.”

The fiesta which will commence on the 24th of December will take place simultaneously at five different venues such as  Agege stadium Agege, Barbeach, Epe, Ikorodu, Badagry and Victoria Island, culminating in a grand finale at Eko Atlantic City on December 31.

Whilst the popular misconception about Nigeria is that it is one of the underdeveloped economies in the world, our richness in creativity and artistic diversity has continued to earn us a place in the parliaments of global honours.

The past days has seen Nigerians go abuzz over the very well-deserved recognition that Lagos-based children dance group – Dream Catchers has received. Global pop star Rihanna had gotten wind of one out of their numerous dance clips after supermodel – Naomi Campbell shared their video on her Instagram page. Out of admiration for their talent and the infectious joy that they exude, Rihanna shared the video on her Instagram to celebrate a milestone of her being the first female artiste to get 2 billion streams on Apple Music. The video also caught the attention of the world’s second richest rapper Diddy, who also shared the video.

But before this international recognition, the kids were participants at the Lagos Grows Talent competition, an empowerment initiative by the Lagos State Government under the umbrella of its annual One Lagos Fiesta. From the Ikorodu centre where the kids reside, they garnered so much support which saw them get to the grand finale. Unfortunately, they didn’t win the grand prize and this broke their little hearts but indeed, they left a huge impression on all who saw them perform including Lagos State Governor Akinwunmi Ambode. For these kids who according to their handler Seyi Oluyole were destitute, dance is like an escape from the harsh realities they were hitherto faced with before she was able to get them off the streets.

Even though their loss at the competition threatened their confidence, their resilience has earned them, their consistency has proven that the biggest battles are won by perseverance. Seyi cited that their One Lagos Fiesta experience has helped to strengthen their character.

This 2018 One Lagos Fiesta, one lucky individual will drive home a brand new car. However, unlike ordinary raffle draws, the One Lagos Fiesta raffle is open only to residents of Lagos state who are 18 years and above, and for those who have their permanent voter’s card (PVC).

Starting from December 6, 2018, Lagosians can enter for the OLF draw at onelagosfiesta.ng/raffle. Submission of entries is to be done strictly online between December 6-26th 2018. To enter, follow these steps; Visit onelagosfiesta.ng/raffle,  Fill the short biodata form to input your full name, sex, address, local government area and phone number,  Upload a picture of your permanent voter’s card (PVC) finally Submit your completed form. Entry opens from 12 AM on Thursday, December 6, 2018 and will run till midnight of Wednesday, December 26, 2018.