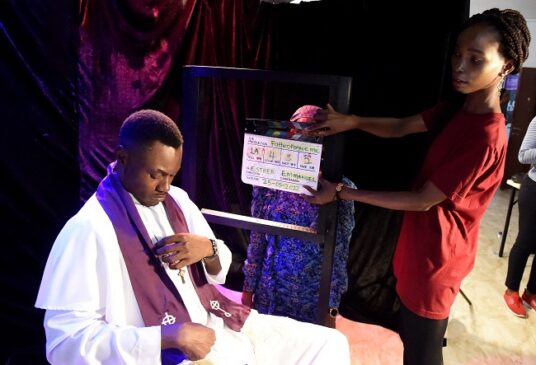 Inside the cavernous Our Lady of Perpetual Help Catholic Church in Lagos, a man in a dark hoodie stops menacingly at the entrance and glares at the Christ statue before him. He crosses himself slowly, staggers against the pews and freezes.

Black baseball cap shielding her eyes, director Esther Abah squints into her monitor. The shot was off. Time for another take.

“Come back, come back,” she calls out to her actor.

With a crew of student actors, lighting gaffers and sound engineers, cameramen and grips, Abah is part of a project to sharpen the skills of a new generation of Nigerian filmmakers to help them appeal to international audiences.

The church scene is part of a six-minute piece “Father Forgive Me”, Abah is filming halfway into an 11-week intensive course with EbonyLife Creative Academy.

The joint project between EbonyLife production house a Nigeria film powerhouse and the Lagos State government wants to train students like Abah to make African stories for a wider international public.

Films like “Father Forgive Me” a tale of a priest struggling with a moral dilemma may not get to the foreign market, but they are teaching young moviemakers how to appeal beyond Nigeria.

“You can have an original story, but you have to present it in a way that anyone will watch it,” said Theart Korsten, the South African head of the Lagos academy. “We want them to tell Nigerian stories for the international audience.”

Nigeria’s domestic film industry, Nollywood, is massive, and prolific — second only to India’s Bollywood in terms of quantity of movies produced and ahead of Hollywood.

Its films, along with the dominance of the Afropop music scene with stars like Burna Boy and WizKid, have guaranteed Nigeria’s place as a cultural powerhouse on the continent.

Nollywood has come some way since its roots in the early 1990s when directors made low-budget videos and DVDs that rarely made it to the cinema screen.

But Nigeria’s film industry made up 2.3 percent of the national GDP or $660 million last year, according to the PwC Global Entertainment and Media Outlook report.

A shift to television, cinemas and streaming has made films more accessible to Nigeria’s elite and the African diaspora, eager for content with bigger budgets, said Alessandro Jedlowski, an anthropologist specializing in Nollywood at Science Po university in Bordeaux, France.

The rise of platforms like Netflix and Amazon is also creating demand for better films from beyond the western studios that have traditionally dominated the entertainment industry.

Already some of the academy’s students helped in the production of Netflix’s first original from Nigeria, “Blood Sisters”, which tells the tale of two friends caught up in an accidental killing.

“Netflix is global, so it’s getting traction, not only from the Nigerian or African diaspora, (but) traction from Europe and America also,” said Nigerian filmmaker and EbonyLife teacher Daniel Oriahi.

“It’s great our stories are getting global attention but what are we going to do differently?”

Opened just over a year ago, the school takes up part of an EbonyLife building in Lagos’ Victoria Island commercial district, where students specialize in one aspect of filmmaking from scriptwriting to post-production.

About 500 hopefuls apply for 120 posts in the program, which is free and taught by filmmakers from South Africa, Kenya, and Nigeria.

After a few weeks of training, they move on to filming in an intense program. Four of the films are selected to get a screening at the graduation ceremony.

“I made a couple of short films, but I knew I needed to understand more about the film,” said young director Abah.

“I see film now from a different perspective and I really understand what film is all about.”

For the Lagos State government, the investment was part of a drive to help the city’s creative industries.

Another Lagos school, Africa Film Academy, this month said it also signed a deal with Lagos State to offer a free six-week course in film skills.

“The government has invested hugely in this training, and we are happy that we are seeing the results,” said Lagos tourism and culture commissioner Uzamat Akinbile Yussuf.

Back at the Lagos church, an actor’s makeup is touched up by the light of a cell phone as lighting crews look at how to capture the colours of the stained-glass windows.

“We have to make do with what we have,” said Elijah, one of the lighting crew.

The camera rolls as a character moves off the sellotape cross on the floor marking his starting point.

Patience is wearing thin, and the crew gets restless.

South African cinematography lecturer Jan du Toit steps in with a touch of guidance. He moves lighting into the pews and guides the cameraman to smoothly follow the actor.